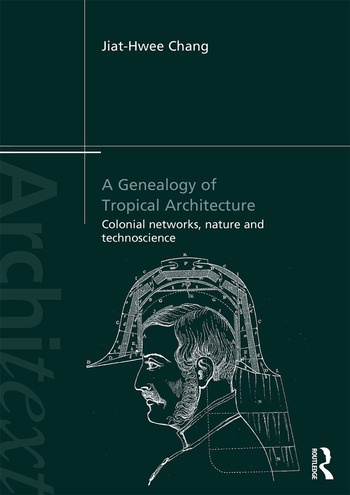 A Genealogy of Tropical Architecture sets out to challenge a common practice of ‘traditional architectural historiography’ by radically contextualizing the history of an architectural style and effectively transforming the usually vague and apolitical term of ‘tropical architecture’ into a politically charged discourse that reveals the asymmetrical power relations of colonialism and the intricate network of imperial power. By engaging with postcolonial critique and the Foucauldian power-knowledge concept of ‘genealogy’ (a ‘history of the present’), Jiat-Hwee Chang explores the overlooked issues of how environmental technologies and the technoscientific knowledges and practices of tropical architecture are linked to various disciplines, from military technologies, medical theories, cultural assumptions and sanitary practices during the colonial time, to contemporary climatic design, tropical building science and institutionalised hegemonic norm in tropical architectural development. NKP

"The tropics are not just a physical geography defined as the zone bounded by the Tropic of Cancer and the Tropic of Capricorn, or characterized by hot climatic conditions, they are also an 'imaginative geography' that was, in the mode of Saidian Orientalism, constructed as an otherness to European civilization. 'Tropicality' - an environmental otherness deeply entwined with other social, cultural, political, racial and gender alterities."

Experiences of the Common Good: inSite/Casa Gallina: A Project Immersed in a Neighborhood