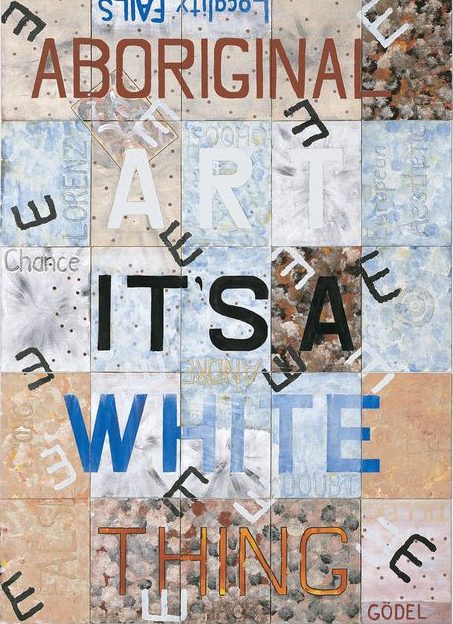 The infamous and incendiary essay ‘Bell’s Theorem: Aboriginal Art, It’s a White Thing!’ was originally written to accompany an artwork and prize entry into the 20th Telstra National Aboriginal Arts Award. It was a shattering of orthodoxy. The award had previously been reserved for ‘authentic’ Indigenous art, framed in ethnographic terms. Then, in 2003, Richard Bell’s Scienta E Metaphysica (Bell’s Theorem), or ‘Aboriginal Art It’s a White Thing’ took the prize with a repudiation of its very terms. It was a work that either had to win, or be banned. The text offers a polemical and mock art-historical analysis of ‘Aboriginal Art’, with the argument that as an industry and anointed artistic genre it is a White-determined artefact. While the essay speaks to a particular historical moment, it remains a vital critique and a seriously good read. VZ

"It is now approaching the fourth decade of Art Centres and they have spawned a new tribe of people called BINTs (been in the Northern Territory). It must be said, though that the largest tribe in Australia is the Lyarmee who get their name from their ability to tell very convincing lies – especially to themselves. There is emerging, as we speak, a tribe of honorary Bints known as the bookee(because they learn everything about Aboriginals from
books and fully fledged Bints). The Bookee rarely, if ever, deign their presence upon the Aboriginal People about whom they have become recently expert."