Black Marxism: The Making of the Black Radical Tradition 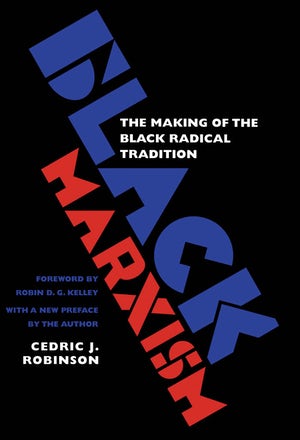 Avery Gordon introduced me to this book, having taught with Robinson at UC Santa Barbara until his retirement from the Centre for Black Studies Research. It was to become a crucial resource for me: as someone brought up in the Western Marxian tradition, I needed this corrective from Robinson: that Marx profoundly misread the history of oppression and thus the possibility of revolution as a white, Western concern and tradition. The book ‘attempts to map the historical and intellectual contours of the encounter of Marxism and Black radicalism, two programmes for revolutionary change’ (p. 1). It does this through a systematic reading of the long tail of Black intellectual and activist struggle.  Such an understanding is influenced by W. E. B. Du Bois’s understanding of ‘double consciousness’ as both a tactic and a resistance. It can also be patently felt in the writings of Octavia Butler, who imaginatively recreates a ‘prelife’ of slavery through a futurism that will not take the substrate of historical reasoning from white history. I know many of the artists whose work has been acknowledged by Visible both belong and desire to emancipate this consciousness of power of alternate histories and contexts. AP

"For those African men and women whose lives were interrupted by
enslavement and transportation, it was reasonable to expect that they would attempt, and in some way realize, the re-creation of their lives. It was not, however, an understanding of the Europeans that preserved those Africans in the grasp of slavers, planters, merchants, and colonizers. Rather, it was the ability to conserve their native consciousness of the world from alien intrusion,
the ability to imaginatively re-create a precedent metaphysics while being subjected to enslavement, racial domination, and oppression. This was the raw material of the Black radical tradition, the values, ideas, conceptions, and constructions of reality from which resistance was manufactured."