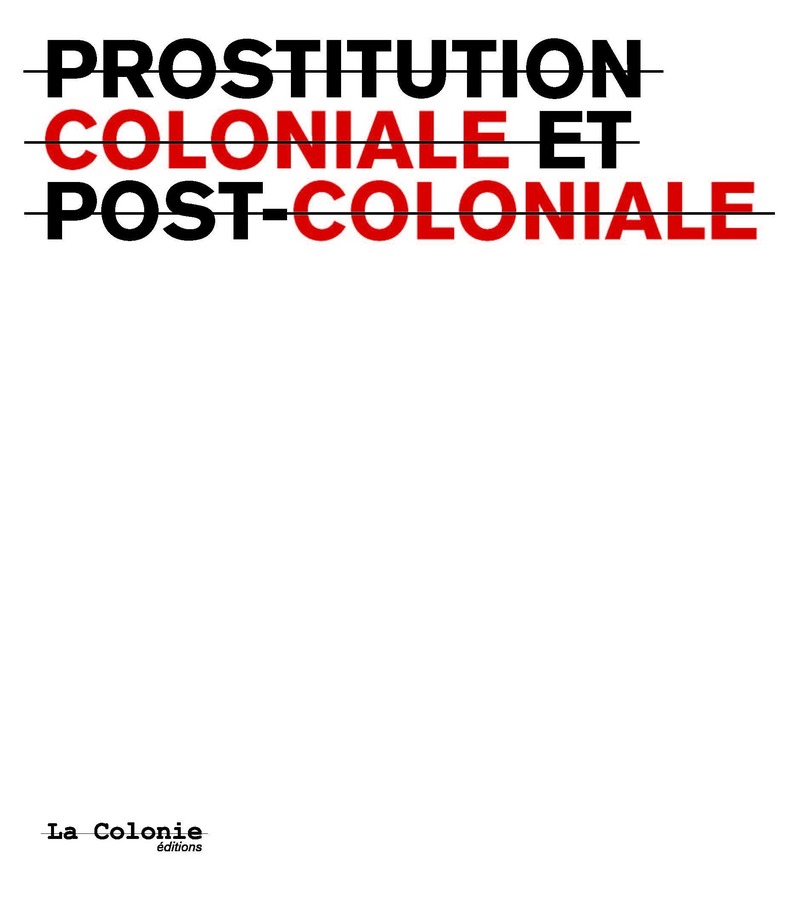 The bi-lingual edited collection Colonial and Postcolonial Prostitution, the first book to appear from
La Colonie éditions in 2019, distributed via French publishing house La Découverte, sets out to
bring to light the lasting, systemic links between colonization and prostitution through a reading
of the French colonial and neo-colonial regulation of bodies — in particular female, poor,
‘subaltern’ or ‘othered’ (e.g., in the words of the media, ‘Muslim’ or ‘Arab’) — and the historical
continuum in the treatment of prostitution, historically and nowadays, vis-à-vis state racism.
Departing from the historian Christelle Taraud’s work, in particular her 2003 book La
prostitution colonial. Algérie, Tunisie, Maroc, 1830–1962, the book assembles a range of voices, from
political scientist Françoise Vergès, writer Arno Bertina and journalist Hélène Azera, to artist
and founder of La Colonie, Kader Attia, along with artists Pascale Obolo and Souad El Maysour,
and a commentary on the cinema of Nabil Ayouch. Crucially, in a move to avoid the
objectification noted above and the tendency towards victimisation, the publication foregrounds
the testimonies and commentaries of the sex workers themselves, with contributions from Germaine
Aziz, Grisélédis Réal, Myln Juste and Aying in various forms including essays, manifestos, poems,
interviews, life stories. As Attia narrates in his foreword to the publication, Taraud’s book on
colonial prostitution immediately struck a chord, finding ‘a form of echo’ in possible discussions
at La Colonie because ‘it described a world that political and economic morality don’t want to
render visible’, with the colonised bodies of Taraud’s book finding resonance in the ‘subaltern’
bodies of postcolonial societies such as France — bodies objectifiable, colonisable, criminalisable
and violable.
Returning to the practice of ‘publicare’ as both making and producing publics, the context
of the book’s publication is vital. Founded by French-Algerian Attia and restauranteur Zico Selloum in 2016 after many years of planning and gestation, La Colonie is a hybrid space, an agora – or forum-in-perpetual-making that serves as venue for conferences, debates, screenings, performances, music, exhibitions; a laboratory for ideas; and a café/bar. And, crucially, a space of decolonial transmission, a space for developing tools for concrete struggles, which welcomes all kinds of identities, all kinds of stories, especially minority. (In this context, the creation of the space is an important move for Attia as an artist who, in his own words, has ‘always been concerned by the limits that representation has in terms of political engagement’ and who, with the creation of the discursive space of La Colonie, moved into the realm of action.) And let us not forget the politics of naming. The ‘barrée’ or striking through of La Colonie is a means of graphically signalling the kind of space intended: if the colony is a sphere from which many are excluded, the ‘crossed-out colony’ here indicates ‘a re-appropriation and occupation of a sphere of freedom we have been removed from.’ Recalling the specificity of the ‘décolonial’ in France mentioned above as a deviation from the institutionalised postcolonial of the academy and as an act of nomenclature initiated from militant activist circles (see Ferdinand), as per its predecessor Espace Khiasma, an arts space in Les Lilas (a suburb in the northeast of Paris) that closed in 2018 after fourteen years of activities, La Colonie provided the physical and political space in which activists, academics and artists could assemble, hence making place for the ongoing work of
decolonisation. Here the space and the publication echo each other with respect to a levelling
out of the notion of ‘expertise’ (see also Sonjasdotter and Sakiya) and an emphasis on combining
the voices of academic researchers, activists and artists. While in the UK plans are currently
underway for a ‘Free Black University’, La Colonie for many years hosted the collective ‘Décoloniser les arts’ and its associate alternative university, which is open to all. In July this year, Attia announced that La Colonie would be closing. As an independent space that depends on its café and bar financially and receives no external funding, be it public or private, the toll of Covid-19 had been too great. But, as Attia stated on Facebook, ‘we have to fight to find a new space, to exist, to give everyone a voice, to find ourselves in reality. We are already looking for another space in Paris or in the suburbs, to continue the adventure and the struggle.’ Hence, the newly initiated La Colonie éditions remains for the moment in a state of latency, awaiting a new chapter. In the French context, opposition towards the ‘décolonial’ has been rampant within public space (i.e., the socio-political space of the French Republic and French laïcité), especially where it deals with taboo issues such as institutionalised racism and Islamophobia. This is now further exacerbated by current plans by the French government to criminalise ‘separatism’: to introduce a law that aims to ‘avoid certain groups becoming closed in around ethnic or religious identities’, and that has targeted anti-racist activists. In a moment in which state-funded cultural institutions across the world are taking up – and to some degree monopolising or cannibalising – the discourse of the decolonial with a fervour, the need for
independent spaces such as La Colonie, together with their publications, is of utmost urgency. SS

"Why is La Colonie extending its activities through this first book? Because to fit into the ergonomics of a publication the anticolonial laboratory of discussion on all the wounds of the colonial past that haunt our society from the inside, from its psyche to its politics, is to invent an official form of counter-narrative that is necessary to balance the forces of our world.
To reproduce, in the form of an object that can be read, looked at, that can teach us about our rights, about our History, and that will remain as the trace of a possible repair, a subject that deliberately lacks visibility in the psycho-political space of our society, it is to act against the recycling and dissolution in contemporary amnesia of the inequalities that weaken us all. […] The main goal of this publication and of the project that gave birth to it, La Colonie éditions, is not only to extend, beyond the debates and our activities, the issues raised, but also to provide the public with tools to face and anticipate the unacknowledged and unexpected aspects of these issues. Our goal is also the transmission, amplified by the editorial object that constitutes this book, of these causes that are totally absent from and yet inherent to social debates, while clarifying, with the help of other forms of practices – artistic, theoretical, historical, poetic – the reality of their existence: the importance of a common consciousness of this History,
which, as long as it is not in the process of repair, will reappear on the surface in an explosive manner under the most unexpected form or mode."