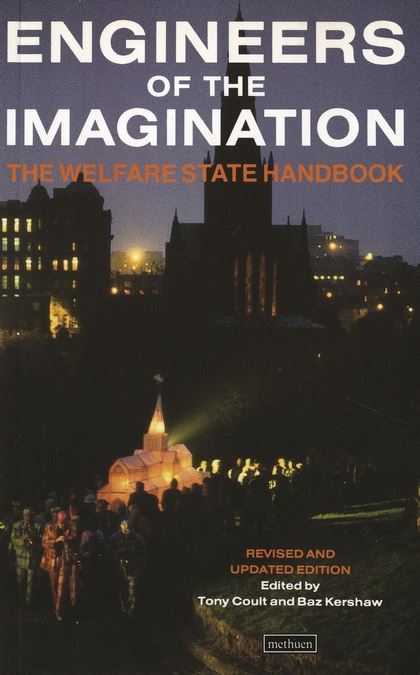 I first experienced the work of the theatre collective Welfare State International whilst at school in the 1980s; their work became a blueprint for lots of the work we made on the undergraduate Theatre Studies course at Dartington College of Arts, Devon. The company was a loose band of hippy ideologues with a deep commitment to rural intergenerational celebration and protest; as Tony Coult says in the introduction to this book, ‘[t]his long-term research-and-practice seeks to re-establish, away from the conventional building-based middlebrow/middle-class theatre, the popular traditions of the working class, such a Carnival, the Feast of Fools, the fairground, the mummers’ plays, that vein of subversion as entertainment that runs through so much folk theatre and song.’ (p.1) Writing before the 1999 re-publication of the Welfare State Handbook, Baz Kershaw adds: (See the quote below).
Some of these qualities are still reflected in the contemporary practices of those artists’ groups supported through the Visible project. However, what is most inspirational about this publication, rather than its historical analysis, is the fact that it is a handbook: it gives away patterns and formulas for making large-scale sculptures, moving buildings, costume designs, etc. This act of radical sharing is, in my view, missing from most contemporary practice. AP

"Now, in 1990, we must open up the argument by noting that the central paradoxes of Welfare State’s best work crystallise all that is positively dangerous in the company’s creative practice, in that they suggest an impossible mission caught in a web of self-contradictions and vicious circles. In the company’s policy statements they are usually signalled by the yoking together of unlikely bedfellows: pathological optimists, civic magicians, holy fools, engineers of the imagination."