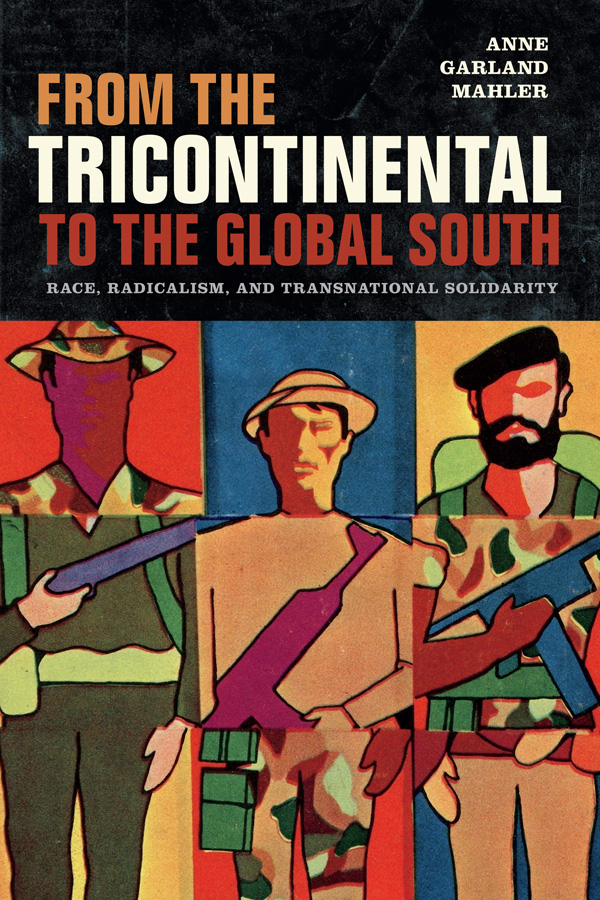 Published in 2018, Anne Garland Mahler’s From the Tricontinental to the Global South is a compelling historical narrative that seeks to read the legacies of the Tricontinental, a Cold War transnational, anti-imperial struggle for racial justice, in the context of contemporary social movements, in particular in the USA. While the references at the time the publication was written were events such as the 2014 restoration of relations between the USA and Cuba, and the protests in
Ferguson, Missouri, following the police murder of Michael Brown the same year, the book
speaks to the current surge in the global reach and internationalist impulse of Black Lives Matter
following the murder of George Floyd in May 2020.
The Tricontinental formed in January 1966 when delegates from liberation movements of
82 nations in Africa, Asia and the Américas gathered in Havana, Cuba, to form an alliance
against military and economic imperialism, as such marking the extension into the Americas of
better-known Afro-Asian movement that emerged from the 1955 Bandung Conference. One of
the principle assertions is that, in comparison with Bandung, the Tricontinental has been
somewhat overlooked, and that it has been misunderstood, in Garland Mahler’s argument, as
simply a conference that took place in 1966, or as merely a propaganda arm of the revolutionary
Cuban state. Instead, Garland Mahler demonstrates the import of the Tricontinental as an
ideology that remains profoundly useful for today’s global struggles and social movements, in
particular those against anti-Black racism and global capitalism, with the latter viewed in
particular through the lens of racial capitalism. To be clear, Garland Mahler does not simply
propose a celebratory embrace of the Tricontinental as an ideal model for political activism
since, as is well documented, it entailed huge inconsistencies such as ‘its overwhelming silence on
racial inequalities within countries with leftist governments [for instance, Cuba] and its tendency
to address itself to a heteronormative, masculinist subject’ (p. 5). However, there are many
benefits to revisiting the movement. For instance, studying the Tricontinental through its role in
the history of Black internationalism and foregrounding the role of Afro-Cuban intellectuals in
conceiving of its ideology allows for an acknowledgement of the role of Afro-Latin Americans in
the tradition of Black radical thinking.
Key is Garland Mahler’s identification of a paradox at the heart of contemporary
anti-systemic politics: on the one hand, protests against global capitalism ‘tend to reproduce the
rhetoric of multiculturalism, generating silences around racial inequalities’. On the other hand,
‘movements organised around racial justice tend to frame violence toward racialised populations
within a context that is limited to a critique of the state, sidelining a broader consideration of the
intersection between racial violence and global capital flows’ (p. 2). To respond to and historicise
this disjuncture, Garland Mahler argues for revisiting the Tricontinental movement, which
‘articulated its critique of global capitalism precisely through a focus on racial violence and
inequality’. Contemporary progressive social movements, she argues, ‘are reviving key ideological
and aesthetic elements of the Tricontinental while leaving aside its primary contribution to the
formation of a global struggle against antiblack racism’ (p. 3). This said, with the increased
framing, particularly in 2020, of both anti-capitalist protest and struggles for racial justice
through the language of decolonization and abolitionism, at least in the USA and Europe, one
might argue that the disjuncture identified in the book is beginning at least to lessen, insofar as
anti-black racism is increasingly linked in mainstream rhetoric to the global legacies of
colonialism and global racial capitalism, and the hypocrisies of state and institutional rhetoric of
multiculturalism, following the recent wave of racial justice activism, are progressively being
brought to light.
In conversation with scholarship on Third World internationalisms, Black radicalism and
discourses around decolonization, the book is not only invaluable for its sustained research on
the Tricontinental, but also for mapping discourses around the so-called Global South,
transnational solidarity and south–south relations. (Garland Mahler has published extensively on the ‘Global South’ and is founder of ‘Global South Studies: A Collective Publication’, a digital
scholarship project that aims to advance the emergent field of Global South Studies through an
online platform and collective mapping of key concepts, thinkers, moments and issues within the
field.)
Furthermore, in the spirit of the mapping of vocabulary that I am attempting across these
entries (for instance, the ‘decolonial’ in relation to the ‘postcolonial’; see Bajorek, Ferdinand, La
Colonie), the book is useful in its outlining of the shortcomings of the field of postcolonial
studies in relation to the ‘Global South’, with the latter understood both geographically (as a
post-Cold War alternative to ‘Third World’) and conceptually — as a critical concept that
encapsulates horizontalist approaches to culture and politics, deviating from a centre–periphery
model, and refers to the resistant imaginary of a transnational political subject. The argument
here is that the ‘Global South’ represents an attempt to recover a legacy (the Cold War ideology of
Tricontinentalism) that has been overlooked within the ‘all-encompassing frame’ of postcolonial
theory, a field that has had a contentious relation with Latin Americanism and that tends to
focus more on national contexts (as with Bandung) and the experience of colonization than a
horizontalist ideological project or the oppressed populations in wealthy countries such as the
USA. ‘Tricontinentalism’s more fluid notion of power and resistance is parallel to a shift
currently taking place in academic scholarship from postcolonial theory to the Global South’ (p.
8).
Throughout Garland Mahler’s analysis is the role of cultural production or what she calls
‘cultural texts’ broadly understood — for instance, the political posters, journals, magazines,
communiqués and films produced and circulated from the mid-1960s onwards, all of which one can
locate traces of in contemporary visual cultures of protest, albeit often in digitised form.
Circulated globally in four languages (English, Spanish, French and sometimes Arabic),
Tricontinental materials used simple visual language to create immediate impact for nuanced
political issues such as inequality, racism and economic exploitation. As such, the Tricontinental
can be read not only as an engine for international political radicalism, but also of its global
cultural production. SS

"While it was consistently hypocritically silent on racial inequities within Cuba, the
Tricontinental played a pivotal role in generating international solidarity with the U.S.
civil rights movement as well as with the antiapartheid struggle in South Africa, and its
vision of global resistance was shaped by its foundations in black internationalist thought and by the close involvement of African American and Afro-Latinx activists.
From the Tricontinental to the Global South analyzes the expansive cultural production of the Tricontinental and traces the circulation and influence of its discourse in related radical texts from the Americas, including Third Cinema, Cuban revolutionary film, the Nuyorican movement, writings by Black Power and Puerto Rican Young Lords activists, as well as works from contemporary social movements such as the World Social Forum and Black Lives Matter. Through this tracing, this book identifies a set of Tricontinentalist texts, referring to any cultural product that engages explicitly with the aesthetics and especially the discourse of Tricontinentalism, meaning it reflects a deterritorialized vision of imperial power and a recognition of imperialism and racial oppression as interlinked, often using a racial signifier of color to abstractly refer to a broadly conceived transracial political collectivity. Through identifying and analyzing Tricontinentalist texts from the mid-twentieth century to the present day, this book contributes to a transnational reorientation of sites of cultural production whose analysis is often contained within the national and linguistic boundaries that traditionally determine the study of cultural production."