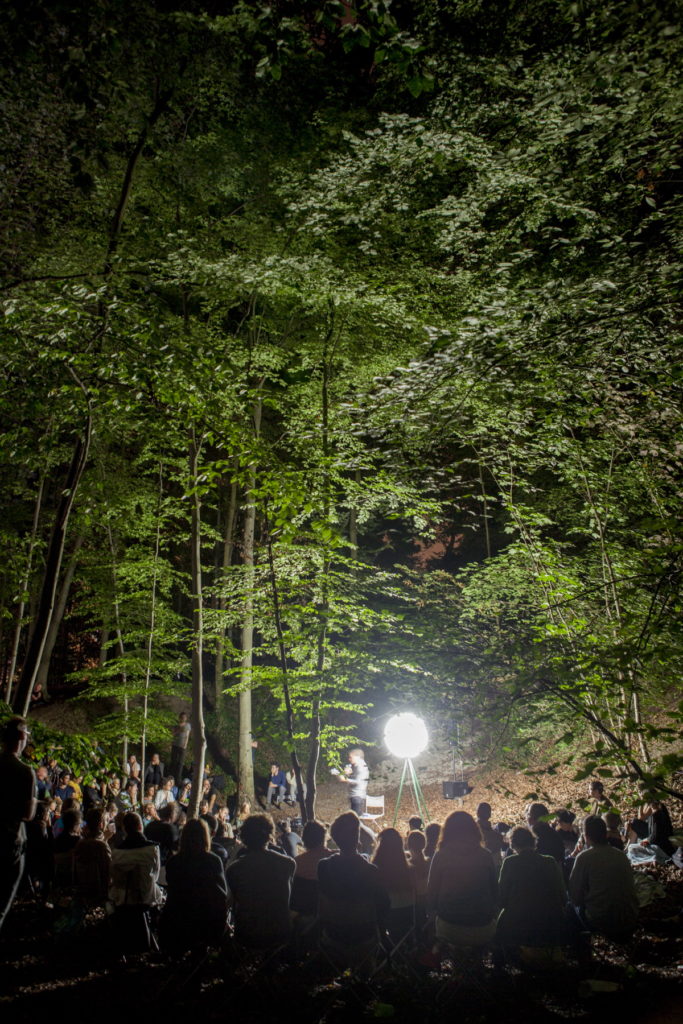 ‘Nature Isn’t Real’ is a lecture given by Timothy Morton deep among the tall trees of Parc Duden in Brussels on the evening of 6 September 2016. The event was part of Nature, a night school organised by aleppo.eu as part of the Jardin Essentiel festival (2016 Parckdesign). In 2014, the word 'Anthropocene' was inducted into the Oxford English Dictionary. Jan Zalasiewicz, the chair of the working group within the International Commission on Stratigraphy, the official keeper of geological time, said at the time, that the new epoch ‘sets a different trajectory for the Earth system’ and we are only now ‘realising the scale and permanence of the change’. Nature as an anthropocentrically scaled concept – where nature is always elsewhere, underneath (human) appearances, in the genes, under the street, over yonder in the mountains, just around that corner, over there in the forest – doesn’t work anymore. Morton advocates through his concepts of ‘dark ecology’ that the much-feared catastrophe has, in fact, already occurred, and is out of control. Morton invites us to wake up and face the fact that we never stood apart, but have always been thoroughly in symbiosis, dismissing who is the ‘host and which is the parasite’. Only the deconstruction of the agrilogistical system and its coercive relations with nonhumans will allow us to change our relation to the planet and also encourage a less coercive one between humans. In order to bring this about, Morton suggests we drop the concept of ‘Nature’ once and for all. JW

"Nature is automatic anxiety trying to cover itself over. Anxiety is when things do not
appear exactly as they seem to be: something is 'wrong' but this wrongness cannot be
located anywhere. Agrilogistical functioning smoothens out this wrongness, treating it
as an anomaly rather than as a default condition. And nature’s nation must be the
smoothest of all."

"Anthropocentric phenomenology is precisely this 'elsewhere-ing' of the nonhuman. The
paradox is that as agricultural civilization version 9.0 (or what have you) now covers most
of Earth’s surface and its agriculture as such – let alone industry – is responsible for an
alarmingly large pro- portion of global warming gases, most humans now intuit that there is
no such thing as elsewhere."