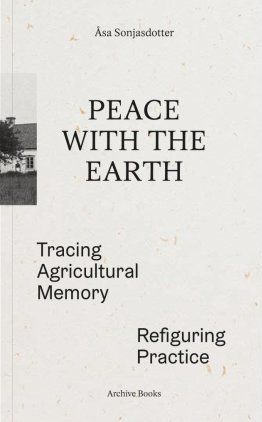 In 1940, Swedish suffragettes and peace activists Elisabeth Tamm and Elin Wägner published a
pamphlet entitled ‘Peace with the Earth’ (Fred med Jorden). As artist Åsa Sonjasdotter writes, their
sharp analysis of industrial farming, which contests the increasingly absolute narratives of both
landowners and sovereign states at the time, ‘predicted many of the issues that have become
apparent today, including soil erosion, water scarcity, as well as food and stress related issues’ (p.
16). The introductory chapter is included at the end of Sonjasdotter’s book, which borrows and
extends the original title and responds to Tamm and Wägner’s earlier call. Further to this, an
English translation of the entire pamphlet will be published by Archive Books.
Through a practice that combines plant breeding and artistic research and that is rooted in
long-term processes of cultivation and unearthing embodied histories from the perspective of
the vegetal, Sonjasdotter has for many years been drawing attention to the inter-species
collaboration between plants and humans and the evolving knowledges and cultures of breeding
techniques that are harboured within plant materials and manifest themselves in the qualities of
given varieties. As Sonjasdotter writes, the material collected in the present publication
‘[testifies] to ways of living off the land’ (p. 15), with the land here being that of the island of
Gotland in the Baltic Sea in southeast Scandinavia. Sonjasdotter had collaborated with the Baltic
Art Center (BAC), located on Gotland, for the future_island project in 2014, which focused on the
island ‘as a heritage site, a network of human and non-human resources, and a site of research
and production’ (p. 9), and was the first artist invited to take part in an artistic research residency,
The Art of Heritage – An Artistic Research Residency at the Museum of Gotland, a three-year
collaboration between the BAC, the Museum of Gotland and the Konstfrämjandet Gotland,
with support from the Swedish Arts Council’s Regional Development funding. Focusing on the
ancient remnants and recalled knowledge and practices relating to three relict crops on the
island, the project — which is documented through the publication — assembled knowledge from
actors and sites across the island, bringing heritage into the present and future through discursive
forums and an exhibition, all of which revolve around practices of cultivation. While the work is
exhibited in traditional spaces, the memory of the cospecies’ socialisation enabled by agriculture takes place in farm fields and gardens. Land and gardens are thus brought into dialogue with the
exhibition space and museum archive, and Sonjasdotter’s practice is a notable marker for the growing popularity of artists engaging in a re-imagining of the space of the garden: as archive,
laboratory, exhibition space, site of pedagogy and so on (see also Sakiya).
In Azoulay’s tome, the act of rehearsal — rehearsals of particular moments and sets of
claims or demands – was prioritised as a mode of enacting ‘potential history’. Here this
potentiality functions both through the return to or retrieval of Tamm and Wägner’s 1940
critique and their appeal to make peace with the earth (perceived at the time as retrogressive, yet
today appearing correct) and through the status of certain objects (for instance, documents,
photographs, plant species, seeds) that ‘function as buoys in a large spacetime, creating potential
routes to further knowledge’ (p. 15). History, in Sonjasdotter’s project, is engaged with through
the gaps and inconsistencies in historical narratives, and the potentialities that these cracks
enable.
Although the Swedish setting may not appear at first sight at least to be one to which a
post- or decolonial endeavour might apply, Sonjasdotter’s approach of reading living cultural
heritage through the lens of nature as much as culture is very much a decolonial response to the
‘environmental fracture’ diagnosed in Ferdinand’s A Decolonial Ecology — the bifurcation between
nature and culture and prioritisation of the latter over the former. A division that Tamm and
Wägner had already drawn attention to in their 1940 pamphlet without necessarily naming it as
such — a ‘colonial inhabitation’ (Ferdinand) as a mode of inhabiting and appropriating the earth
on the part of those who believed/believe that they were/are entitled to do so for the benefit of
a few (see also the exploitation of the commons in Azoulay and Sakiya). And for this form of
colonial relation to the earth one need not wait for the Sámi question in Sweden (see Garcia-
Antón, ed.).
Peace with the Earth: Tracing Agricultural Memory, Refiguring Practice is published by Archive, a
Berlin-based non-profit organisation for cultural research that is committed to the practice of
‘making public’ noted in my introduction — an expanded form of publishing that includes
exhibition-making and a platform for discussions, lectures, screenings and exhibitions. Importantly, as Sonjasdotter notes in the publication and as is articulated more explicitly at further length in the March–April 2020 Archive Journal in relation to Covid–19, ‘[i]industrial agriculture has become one of the major sources for climate collapse, species extinction, and epidemic illnesses’ (p. 17). SS

"When documents of different historical forms of cultivation in this region are assembled together, connections between agriculture, land extraction, and violence become tangible. Long-term nutrient extraction brought about depletion, which increased the demand for more farmland in Europe as well as overseas. The demand has not stopped. Instead, it has escalated in ways that cause irreversible damage to habitats and people. […] Cultivating these [ancient or sidelined] crops is one way to reconnect to the deep memory stored in the living landscape and to begin the process of refiguring how to live in peace with the land."