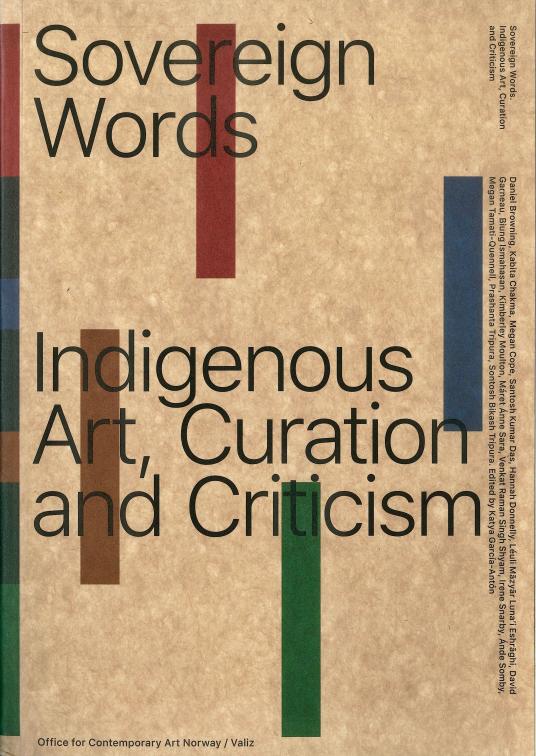 Sovereign Words: Indigenous Art, Curation and Criticism, published by the Office for Contemporary
Art Norway (OCA) together with Dutch independent publisher Valiz, makes a significant
contribution to the current debate on art and curatorial practices in public space for a number of
reasons. As a ‘reader’ that gathers together indigenous voices from around the world to engage
with the contemporary challenges faced by artists and cultural workers with respect to
‘indigeneity’, the publication is long overdue and sets an important precedent. All the more
important is the fact that Sovereign Words is published by OCA, which takes pains to acknowledge
the Sámi people as the Indigenous people of the Fennoscandian region (including Finland,
Norway and Sweden) and has in recent years consistently worked with Sámi artists and
addressed issues of colonial consumption in relation to Indigenous artistic practice. While many publications are dedicated to the question of the ‘Global South’ (see also Garland Mahler), OCA’s programming demonstrates the necessity of including ‘perspectives from the North’ within post-and decolonial studies, as well as critical Indigenous studies.

The book is organised through four sections: ‘Sounding the Global Indigenous: Language,
Contemporaneity and Indigenous Art Writing’; ‘Sovereign Histories of the Visual’; ‘Statues,
Maps, Stories and Laws: Critical Perspectives on Land Rights and Use’; and ‘Sovereign World-
Building, Acting Within and Beyond Notions of the Curatorial’; each with brief editorial
introductions and generously illustrated contributions featuring artists’ works and contextual
images. Underlying the book’s ethos is the idea of a ‘decanonised future’, something that OCA
has been working on through their public programme. Such work entails not simply ‘expanding’
the canon in order to ‘include’ more voices and perspectives, but rather questioning the very
epistemological basis upon which the canon had been constructed in the first place. In the case
of Sovereign Words, this work is carried out through newly commissioned texts from sixteen
Indigenous voices from four continents, and emerges from OCA’s Critical Writing Ensembles
platform (the 2018 edition having gathered Indigenous peers to a residency and discursive
programme, ‘Sovereign Words: Facing the Tempest of a Globalised Art History’, with the peers
having presented their texts at a six-day discursive programme at the Dhaka Art Summit).
Against the backdrop of the ‘Global Turn’ in international curating, as well as the colonial
tendency to reduce Indigenous experiences to mere locality in order to isolate and render
invisible their import, the publication bears witness to the global art worlds and discourses in
which Indigenous contemporary artists participate, producing international networks and a
collective consciousness (see also Gray, Garland Mahler). Vital here, as in Azoulay’s Potential
History, is an alternative understanding of sovereignty, in particular in relation to land and to the
visual, and the use of this in the practice of world-building (see also Ferdinand): sovereignty as embodied, grounded and intersubjective (between humans and nonhumans), and hence distinct
to Western constructions of sovereignty predicated upon a universal authority, territorial
integrity and the rights of the individual.
In the current context of debates around ‘allyship’, solidarity and ‘white innocence’ that
have been brought to the fore by the global uprisings against anti-Black police brutality, the book
is useful for its thorough consideration of these issues with regard to increasing interest (be this
from curators, critics, audiences or ‘consumers’) in Indigenous artists and art. The opening essay
by David Garneau, ‘Can I Get a Witness? Indigenous Art Criticism’, provides necessary caution
for non-Indigenous critics, however well-intentioned, with respect to the ‘settler business’ of
writing about or engaging with Indigenous contemporary art and the risk of the Indigenous only
being visible when in proximity to ‘white witnessing’. Rather, Indigenous contemporary art is
here presented ‘as research, a form of questioning, of striving to generate new knowledge, new
feelings, sensations, thoughts and intuitions and new identities’ (p. 20). SS

"This publication challenges cultural workers (Indigenous and non-Indigenous) to engage
meaningfully and ethically with the histories, presents and futures of Indigenous cultures, arts and thoughts, and to consider the ricocheting effects that this engagement will inevitably have on international canonical perspectives. What will the new histories of the arts of Indigenous practitioners look, feel and sound like? How will novel methodologies of word/voice-crafting be constituted to empower the Indigenous discourses of the future? Is it sufficient to widen the hegemonic and Modernist art-historical canon through the politics of inclusion? Is this expansion a new colonial model for Indigenous practices, or is it fostering the cosmopolitan kind of thinking that Indigenous communities have always shared? To whom does the much talked-of 'Indigenous Turn' belong? And does it represent a project of introspection and revision in the face of today’s ecocidal, genocidal and existential crises? Will such a project nevertheless re-assert a hegemonic structure?"