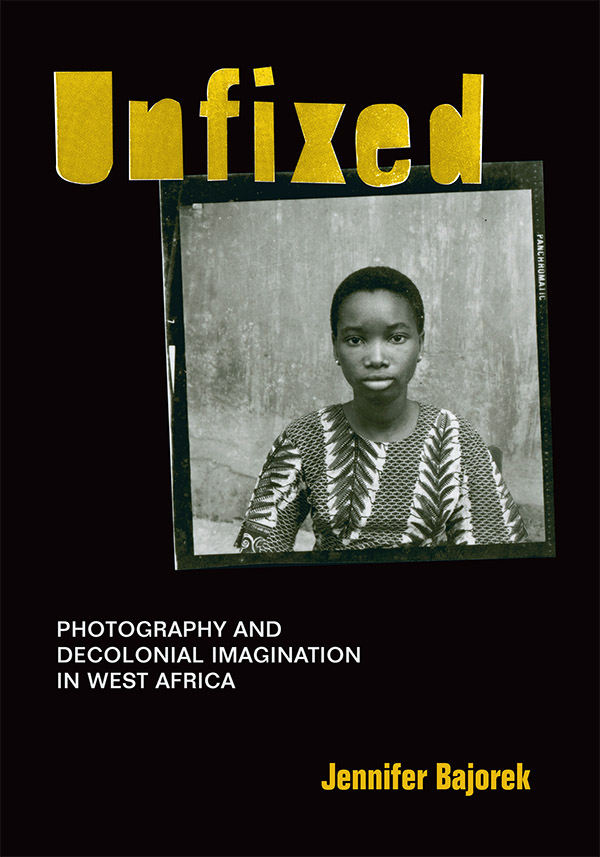 In Jennifer Bajorek’s Unfixed: Photography and the Decolonial Imagination in West Africa, once again
the focus is on decolonisation and the role of the imagination (see Azoulay, Ferdinand),
internationalism and global liberation movements (see Garland Mahler, Gray), as well as attending
to the proleptic import of a particular political imagination produced in part through
photography. The object of analysis in this case is the relationship between photography and
decolonial political imagination in Francophone West Africa in the years immediately leading up
to and following independence from French colonial rule (1960), with a particular focus on
Senegal and Benin. This moment of decolonization coincided with the rapid development of
photography both in West Africa and globally. Combining close formal analysis of photographs
(the book is generously illustrated) with detailed archival research and extensive interviews, in
conversation with contemporary theories of photography, the book explores genres such as
studio portraiture, ID cards and documentary images. Bajorek’s argument is that photography in
West Africa, during the mid-twentieth century, was a key factor in expanding existing spaces of
political imagination. In other words, that photography in this region did not simply represent
reality, but that it actively contributed to creating social and political change for instance in
processes of democratisation of political participation (something overlooked in dominant
histories of photography). Moving away from a EuroAmerican point of view, Bajorek attends to
the medium’s ‘local’ histories’ and its incorporation into the sphere of political imagination.
While the seeds for the research project had been planted through an encounter with
photographic portraits by Seydou Keïta in Paris in 1999, by the time Bajorek embarked on her
first research trip to Senegal in 2007, ‘this thing called “African photography” had exploded, a
new field had been invented’ (p. xvi). It was during this moment that, as Bajorek charts through
a narrative of the context in which her research took place, ‘curators and collectors from Europe
and North America were arriving in the region in increasing numbers and as museums and
galleries all over the world were basically launching a second “scramble for Africa” with regard
to their photography collections’ (p. 18). Somewhat akin to Azoulay’s historical ‘rehearsals’ and Gray’s ‘radical moment’, Bajorek speaks of solidarities that are temporally closer to prolepsis and the ‘to–come’ of messianic time.
Such solidarities emerge from a particular conception of ‘political imagination’ borrowed from
the political philosopher Partha Chatterjee, which refers to ‘the spaces of political action,
relation and participation that cannot be adequately defined either by forms of political
organization associated with the modern nation-state or by the institutions of modern capitalist
democracy’, and acts of imagination and experiences of political belonging that transcend the
face-to-face and cannot be localised in space and time (p. 29). This opens up onto a mode of
‘[exploring] photographs from mid-twentieth century archives in West Africa, not simply as
historical documents, but as engines for the production of this time. As such, it asks about both actual and potential, past and future, contributions to decolonial political imagination of the photographs it discusses’ (p. 29).
As with many of the titles selected here, ‘decolonisation’ is to be understood both in the
historical context of African liberation struggles and with respect to contemporary academic
landscapes. ‘Decolonial’, in Bajorek’s use, is taken from Argentine semiotician Walter Mignolo,
who himself borrowed the term from Peruvian sociologist Anibal Quijano, whose thesis on ‘the
coloniality of power’ demonstrates coloniality as ‘the invisible and constitutive side’ of
modernity. While the ‘delinking’ from modernity that Mignolo calls for is a hard (albeit not
impossible) task to carry out where photography is concerned, the ‘ultimate horizon’ of Bajorek’s
book is ‘to imagine or envision, through photography, the end of colonial modernity’ (p. 31).
The term ‘decolonial imagination’ thus signifies an attempt to ‘re-see’ the vision that the African
photographers, sitters and publics addressed had of what might succeed European modernity.
As per Ferdinand’s shift in perspective from EuroAmerica to the Caribbean as a point of
departure and his insistence on going beyond simply adding more diverse figures to an existing
circumscribed field of environmentalism (see below), Bajorek proposes that it is not enough to
simply call attention to ‘the colonial origins of academic disciplines, which continue to limit the
knowledge we produce’. Rather, this Eurocentrism that is ‘so rampant as to be both
incontestable and in constant need of contesting’ requires that the parameters of an entire
theoretical field be redrawn, and that starting from African examples provides a unique
opportunity for this redrawing. Decolonial imagination here also entails an alternative
understanding of political concepts such as citizenship and hence a moving away from the
emphasis placed on citizenship in Azoulay’s earlier work on the ‘civil contract’ or ‘civil
imagination’ of photography.
While in Azoulay’s Potential History citizenship gets re-worked as ‘a nondifferential, worldly form of cocitizenship situated in a shared world in need of repair’, for Bajorek the concept of citizenship is too mired in European and colonial political histories; rather, Bajorek demonstrates (for instance through a reading of ID-card photography) that ‘the concept of citizenship was actively reclaimed, reworked and reimagined by anticolonial actors in West Africa, and, in the decade immediately preceding independence, this concept became increasingly tied to a projection of the postcolonial state without which liberation had become unthinkable’ (p. 28). Hence the necessity to move beyond a single, all-encompassing political ontology of photography and to instead attend to local nuances. SS

"Each chapter puts photographs from west African archives and collections associated with the independence generation into dialogue with stories shared, and knowledge produced, in interviews I did with west African photographers, their descendants, and other collectors and keepers of photographs in order to illustrate the multitude of ways that urban west Africans were using expanded access to the medium in this moment. I argue and try to show that photographers, their subjects, and their publics used photography to express new experiences, to reshape public and political discourse, and to facilitate new conversations, relays, and exchanges—with people living right next door to them and all over the world—both on the eve of independence and in the post- independence years."