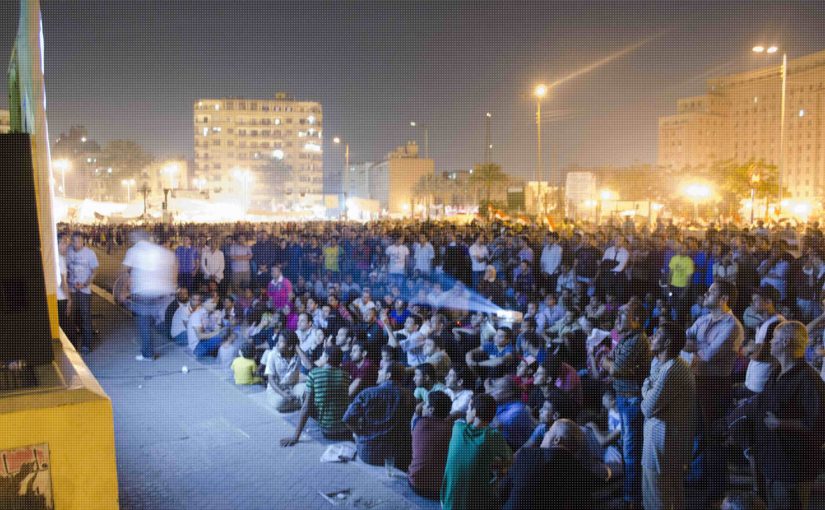 We are media activists, trying to further the goals of the revolution and weaken the state – one of our tools is the production and the dissemination of videos. Our artistic practice is secondary to our political practice.

We document as many aspects of the ongoing revolution as we can (street action, labor movements, and strikes, oral testimonies, biographies of martyrs), and aim to spread our work into the public
sphere through all means available to us (the internet, television channels, Tahrir Cinema and other public screenings, cheap CDs and DVDs, Bluetooth transmitters). We are acutely aware of the inherent class privilege involved in image production and are trying to break it however we can, through free workshops and training across the country, open access to our working space and video archive and the production enabling of public screenings.

The project’s true genesis was in Tahrir Square during the original 18 days of the revolution in January 2011. A human rights tent was established by activists in the central circle to collect video records of police abuses. A copy of this then became the seed of the archive at Mosireen, which began as an initiative on February 26th, 2011 – the first night that violence was used against protestors after Mubarak stepped down. It became clear that night that neither the state nor any of the existing institutions in the country could be trusted to archive and document the revolution properly, and that it was the responsibility of activists to do so. 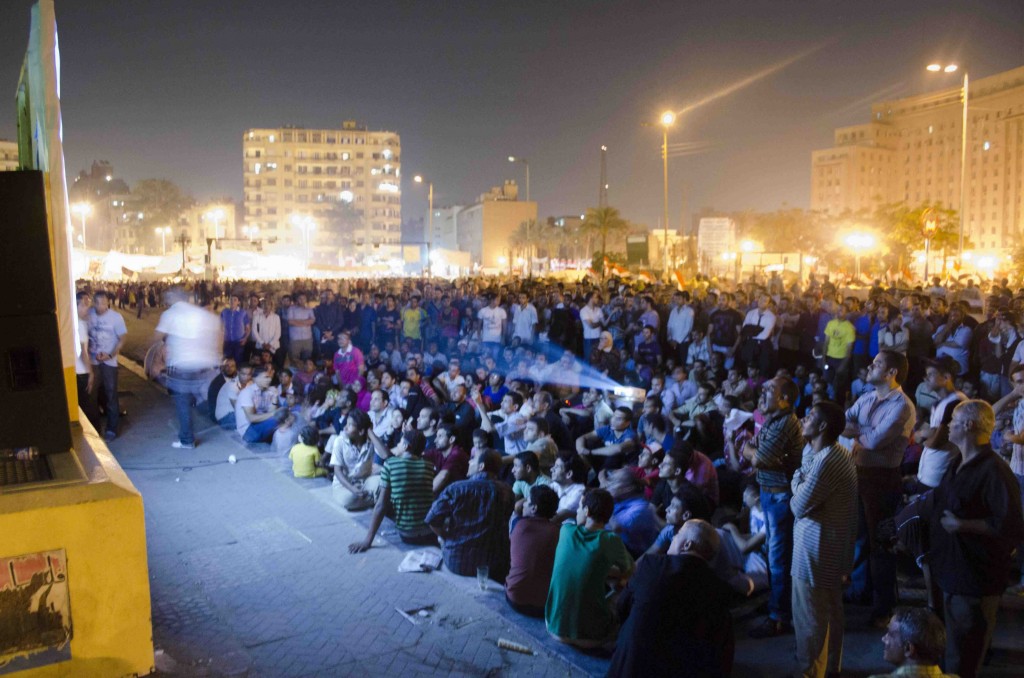 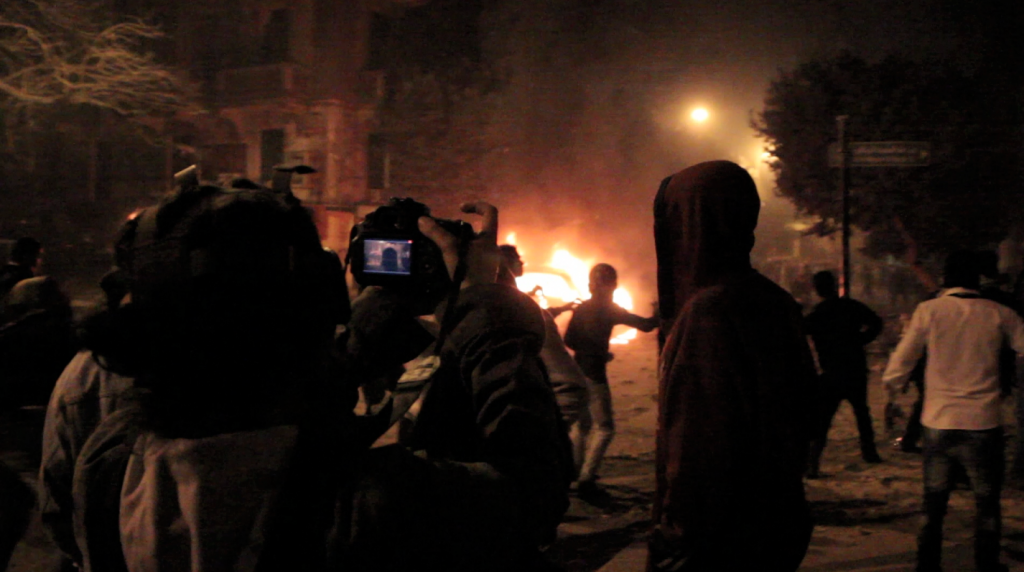 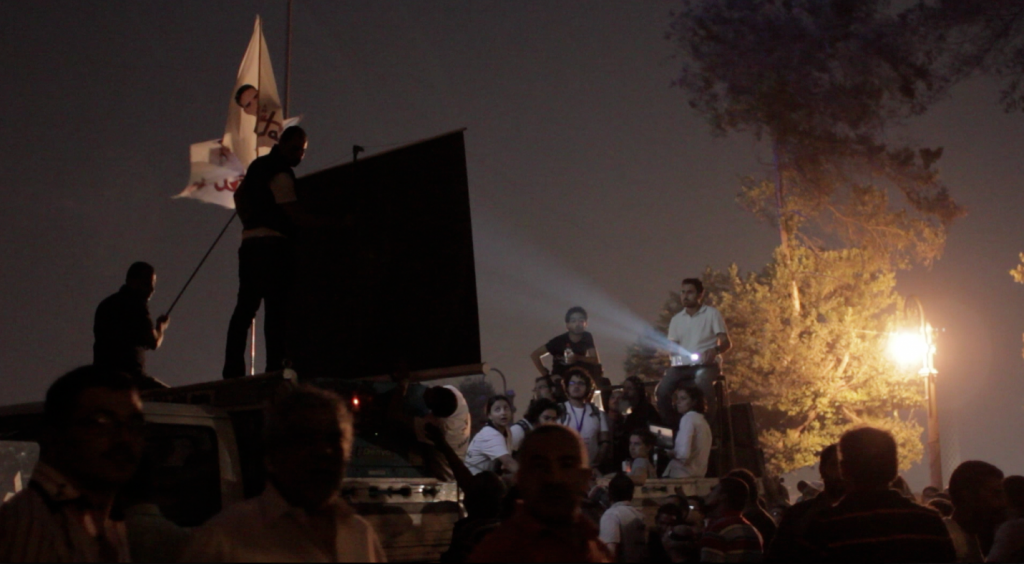 The project head quarter migrated to Downtown Cairo where the archive began to be collated. Film-makers/activists affiliated with the founding members quickly joined in and contributed their footage and time. In July sit-in, the next step was taken with the establishment of the Tahrir Cinema. A nightly screen was erected in the square that showed material from the Mosireen archive to whoever
was interested. The footage was distributed to anyone that wanted it while new footage was collected at the screenings and in the Mosireen tent. It was already evident then that the history of the revolution was being re-written and that the state media were working to undermine its continuation in any way possible. We focussed, in particular, on attacking the ruling military junta, who at the time were enjoying high levels of popularity, as news of their brutality had not yet reached the general public.

The idea of Tahrir Cinema translated into a decentralized, nationwide campaign known as 3askar Kazeboon (Lying Soldiers), which saw street screenings organized by committed individuals across the country. Our films (made available on Vimeo at screening-resolution), and our remixed footage, played a central part of the campaign. In the production of our videos, we have a decentralized, open structure. Our work is released uncredited and without authorship. We aim to create work that always comes from the street level, both in political discourse and its photographic perspective. We are 15 members at the core of the collective but have had up to 40 cameras at work on notable days of action, all contributing to the same film or films.

We only use narration as an artistic tool, as we do not want to appear to be authoritative. We remix other sources when needed, including mobile phone footage and other content from the internet.
Our films range from direct communication between the speaker and the audience (no authorship) to more abstract, carefully edited films (clear authorship). In all cases, they are released uncredited, and it is always known who is working on what, and how others can get involved. All our work is available to download, remix or screen under creative commons.

Mosireen is a non-profit media collective born out of the explosion of citizen journalism and cultural activism in Egypt during the revolution.