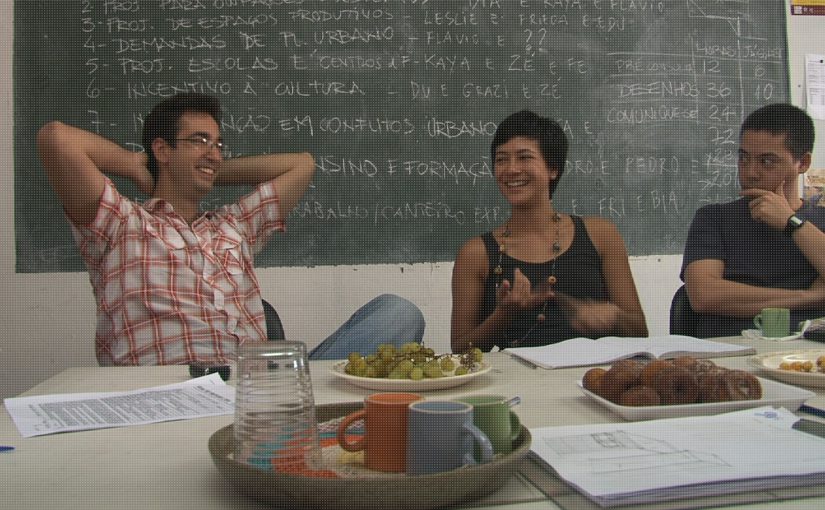 You ask me to establish a relationship between the concept of this new work and my experience as an artist. If there is one thing I have learned about myself in the recent past is that every time I meet a demand – be it from a curator, from an institution, or from a prize like this – I end up seeking new ways of “not fitting” into the demand, sometimes even frustrating expectations. Not in disrespect, on the contrary. I take things so seriously that I cannot avoid making an issue of it, understanding the very proposition as an active part of my research, of my intellectual and artistic practice.

In the descriptive enunciation of this prize, a few words caught my attention, in this order: “intertwined”, “indivisible”, “responsible relationship”, “involvement”, “interaction”, “commitment” and “cooperation”. As an artist who has been collaborating for years with certain Brazilian social movements, I know that this type of suggested and sought after relationship, enunciated in the prize’s description, is not always easy to carry out. Because, even in ideal circumstances, even in a situation of totally shared practices, sometimes there are differences that render relationships not very frank and/or totally unequal. 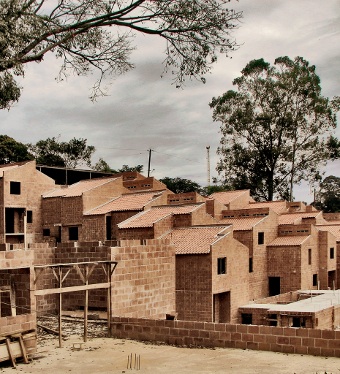 Thus, the following project will not exactly be the project of an artist in relation to a social sphere or to a community, but, before that, a manifestation of this very relationship, both in subject and in form. This work seeks to investigate and point out certain limits and conflicts inherent to the collaborations, avoiding that they should be perceived only in a celebratory key.

So, instead of me working in collaboration with a community to which I do not belong, I chose to develop a project about a group of architects who has been working with popular movements for the last twenty years in the process of building another spatiality. 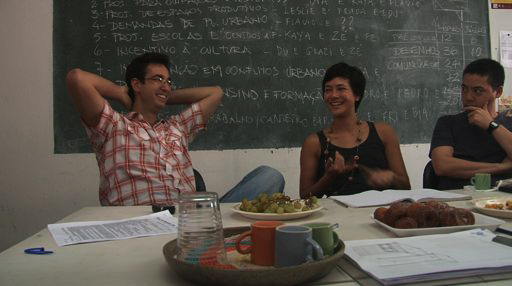 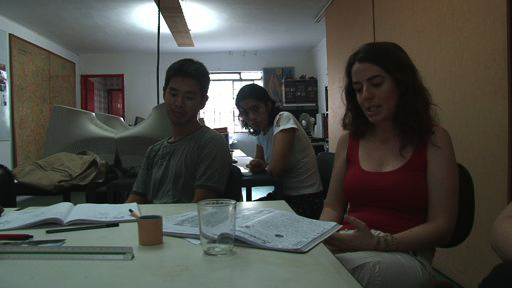 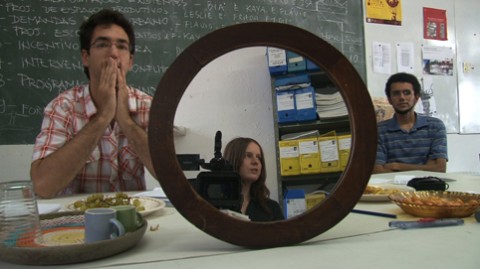 Three years ago I was called to work in this architecture collective. My function there was to elaborate a cinema project with the collective, imagining a special way to document the different works in progress, involving the families of the movements in the process of making films.

Since then I have followed the setting up process of the first “urban commune” of MST, Brazil’s largest social movement, of rural origin. I have also documented the collective design process of the first training center of the Movimento dos Trabalhadores Sem Teto (Movement of Homeless Workers), elaborated during a series of meetings with the building team who will work in the site – militants who are also bricklayers, carpenters, plumbers, electricians and painters.

In parallel to such processes, I started to record in video some of the meetings of our collective. In these meetings I have always been impressed with the capacity that the architects of the group have of mobilizing theoretical/sociological issues in a very deep way, grounded on daily practices. Of all issues approached, the most recurrent is that of rethinking/redefining what the role played by the collective is nowadays. The collectiveí’s aim has always been very clear: to work with organized movements for a large scale transformation. But, in practice, there are differences even in the political projects. There is enormous frustration on the part of the architects who often find themselves reduced to technicians/service providers.

In the building site of the urban commune, for instance, the architects were in a way prevented from developing an educational process, starting from the architecture towards self-management. This was so because only the direction of the movement was authorized to give the political direction to the processes. Likewise, I have faced a series of problems in order to be able to make a film with the families.
In the collective’s meetings, all these issues are widely described and debated, and such meetings became, for me, more interesting than the processes in the building site themselves. (Perhaps due to my very condition as an artist who, differently from the “artists-architects”, need not to give concrete answers to real problems).

As I recorded the meetings, I defined another recording device: the camera is always positioned to correspond to my point of view of the meeting (next to my seat), as a participant itself. I do not resort to close-ups or to zooming, so that the frame shows both speaker and listener: people always appear in relation to one another. The conversations are recorded uncut, pausing only to change tapes. In the moments I speak in the meetings, the camera is not pointed towards myself, so that it shows only people looking at me (looking towards the camera) and one hears my voice.

It is important to highlight that this collective works in a radically horizontal manner: all decisions – including administrative, regarding the architectural projects and political – are all taken collectively, in such meetings, where all have equal right to a voice. At the same time, dialogues can also conceal power structures. Meetings around a table or in a circle are often only apparently horizontal, because they are at all times crossed by power: there are people who speak better than others, people who speak more than others, gender issues, people who have been in the collective for longer, and who are, consequently, more experienced and influential in the group’s decisions… It is understandable and fair that there is respect for the more experienced, but new ideas that could transform or advance collective practice are sometimes ignored or belittled. I am interested in observing, as I record the meetings, not only the debated themes, but also the group dynamics and its complexities. The notions of a “economy of generosity” and of a “active listening” will be investigated: the generosity would be for me to speak for two minutes if the other spoke for two minutes only, because if I speak for a long time, the other necessarily will speak little; active listening would involve listening not only what the other speaks, but fundamentally to listen to that we do not wish to listen, that which escapes our control. When we hear what we do not wish to hear, we can transform ourselves and turn our work indeed plural/collective.

I have recorded a series of meetings, and I plan to go on recording others, and I do not know yet how to describe what use/final result this material will take. Besides such reflections about the relationships/collaborations of the collective with social movements, of the architects with the architects and my own relationship with those architects, the idea is that the very video recordings are to be debated collectively (and the resulting conversations be recorded as well), so as to reveal my own relationship/collaboration with the architects, to render visible the very construction of this artistic project. In the collective’s architecture projects, authorship represents the expression of the group rather than that of the individual architect, and in the case of this project I imagine a balance – or a conflict – between my individual authorship as an artist (who makes choices regarding camera shoots, framing etc.) and collective authorship (when the collective subverts the rules I laid down, as shown in one of the images above: in last year’s evaluation meeting, taken place in December 2010, when it was my turn to speak, the architects placed a bathroom mirror on the table, so that my face appears in the frame, despite my resistance).

With the resources from the prize, it would be possible for me to dedicate more time to this work and to develop it with better technical conditions, do transcripts and translations, but right now it is not possible to advance a precise final form. At this moment I can only envisage an archive with selected excerpts from the discussions, subtitles in English. It is also possible that this archive include short video-essays that I have been carrying out in the urban commune, where I reflect about what is the meaning of me being there. But it is too early to define how this archive will circulate, be shown, debated.

I’m an artist, born and based in São Paulo, Brazil. Along with my video and performance works I also assume curatorial, editorial and educational roles as forms of my artistic practice.