On Killing in Umm al-Hiran

In my line of work—I am lucky enough to think and write about the intersection of technology, design, politics and public space for a living—I find myself exposed to a great many uses and proposed applications of digital computation, all of which claim to improve the lot of humanity in some wise. And if I’m going to be honest, I find these uses by and large drearily oppressive, most of them consecrated to the endless reproduction of the same airless, algorithmic consumerism we’ve felt trapped in for quite some time now. Very, very few generate anything like the hope and sense of wonder I used to associate with technological innovation when both I and the world were just a little bit younger.

Prominent among these very few, though, are the works of Forensic Architecture, as developed under the guidance of its director Eyal Weizman. It turns out that the calculational tools on which the contemporary practice of architecture is founded have a further set of applications, for the most part unexplored and even unsuspected until Weizman and his collaborators came along to establish the relevant body of theory and practice. The same software that lets architects model wind and gravitational loads or the fall of shadows on a structure being designed can be used to reconstruct the envelope of space and time around a contested sequence of violent events, retrieve a set of facts from that envelope that might otherwise have lain latent…and in so doing challenge the state’s monopoly on the production of public truth.

Even when a given state actor grows more sophisticated in its exercise of power, attempting to control the downstream representation of its acts through the physical suppression of observers or the selective release of information, the digital traces of an event and its constituents often remain in whatever acts of documentation can be eked out, registering in the form of timestamp or location metadata, shadow or blast angles, distinctive audio frequencies, perhaps even something as evanescent and seemingly tangential as the shape a column of smoke takes as it dissipates on the horizon. These traces can be correlated, compared with imagery uploaded to social media, published sources, public testimony or other available documentation. An act of transitive closure takes place, in which a previously obscured pattern of facts—something that didn’t quite inhere in any single one of these depictions—is raised to visibility in the combination of multiple perspectives. We learn that our acts have signatures, and with sufficient processing power, diligence and canniness, those signatures can be retrieved.

What this work produces is not a “narrative” of events, but something much rarer and more precious, in our epistemically vexed time: a razor for scenarios, a tool with which we might prune the tree of foliating possibilities, and cleave plausible versions of events from those which simply cannot be sustained. It is a way of saying: This unit acted, at this time, in this place. This type of weapon was used, and not some other. This must have happened before that did, or could. And no other rendering of events is compatible with the interlocking matrix of available facts. In the hands of Forensic Architecture, the digital tools of the architect are used to sift the elements of a complex and contested circumstance, establish something very like a truth, and speak that truth to power.

The truth being produced in the present instance concerns a death, or really a pair of deaths, that occurred pursuant to an act of ethnic cleansing visited by Israeli security forces upon the Negev Desert village of Umm al-Hiran during the night of 17-18 January, 2017. You can watch the video and see for yourself just what was alleged by the Israeli state and its surrogates, and how that allegation was demonstrated to be profoundly inconsistent with the available evidence. But the crux of the situation is this: at a few minutes before six in the morning of the 18th, a Bedouin named Yaqub Musa Abu al-Qi’an was shot and killed by an Israeli policeman, while sitting at the wheel of his Toyota Land Cruiser. 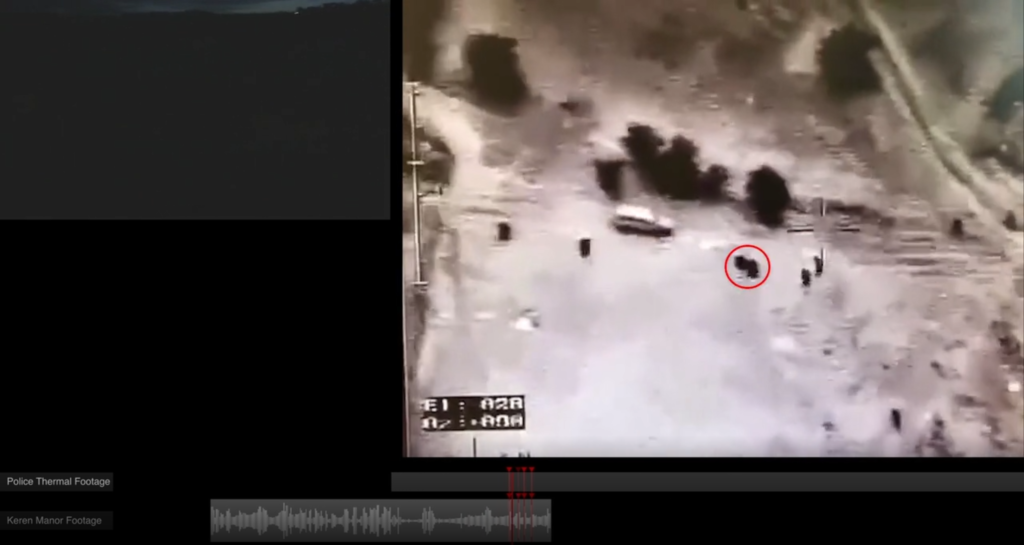 The official story—not merely articulated once, and then retracted as new and contradictory information came to light, but pressed and even doubled down on in spite of such revelations—was that Abu al-Qi’an was shot in self-defense as he accelerated towards a group of police in a clear attempt to run them down. But if Forensic Architecture’s painstaking reenactment reveals this telling of events to be a bald fiction, establishing what actually happened at Umm al-Hiran was by no means as direct or as simple as, say, figuring out who did what to whom in the 2016 police murder of Philando Castile in the United States. As you will see, a consistent, coherent account of the shooting could not be accomplished until audio captured from activist Keren Manor’s video was synchronized with thermographic imagery released by the security forces themselves, a four-dimensional model of the scene constructed, and this in turn cross-referenced with video broadcast by Al Jazeera. A subsequent elaboration of the inquiry, seen here for the first time, involved the physical reenactment of the fatal events, with village residents actively participating in restaging the downhill roll of Abu al-Qi’an’s Land Cruiser. Taken together, analysis and re-enactment comprehensively falsify each of the several specific claims made by the Israeli police about Abu al-Qi’an’s posture, likely intent and actual behaviour, claims intended to justify what otherwise will surely strike the reasonable, disinterested observer as an unprovoked act of slaughter.

Like other state actors, the Israeli state has long grown comfortable with the idea that it can act in impunity, able to direct the flow of information more or less at will through physical control of the area of operations, through unacknowledged editing of putatively exculpatory footage, and not least through selective release of that footage to favored media partners. For them as for their peers, I can only imagine that Forensic Architecture’s intervention is experienced as an outrage, a semi-treasonous impertinence: the stuff of ischemic episodes, something very close indeed to the limits of the conceivable. Agents of the state understand this work, correctly, as an assault. Because the truth is never, can never be neutral, because it always supports some interests and not others. And anyone who works to establish a pattern of truth that undermines their interests, a pattern they have worked so mightily to suppress or dismiss, must de facto be the Enemy.

This cuts both ways, of course. The integrity of Forensic Architecture as a practice—the thing that establishes and undergirds the office’s credibility as an arbiter of charged events—is that their duty is to the establishment of facts, however inconvenient the logic of those facts may be for ideologically interested narratives of all sorts. It manifestly does not happen to be the case at Umm al-Hiran, but sometimes the implacable finding is that a fatal bullet did actually ricochet, just as claimed by the authorities—that a protestor was not in fact deliberately targeted, that the shot that wound up killing them was aimed at the pavement just as the rules of engagement demanded. Far from being outraged by such productions of fact, let alone seeing in them evidence of the essentially toothless and bourgeois nature of the forensic enterprise, activists should welcome them. For here is the juncture at which the more useful and pointed questions arise. Establishing that a weapon was not deliberately aimed at a civilian does not, remotely, absolve the security forces of responsibility for that civilian’s death. It merely pushes back the echelon at which that responsibility properly vests; such questions concern not the agency of the individual soldier or police officer, but the culpability of those responsible for armed force being deployed in that place and time to begin with.

Liberals and radicals will naturally differ as to whether making such circumstances plain is merely reformist, in intent or consequence, but on balance it seems obvious to me that contesting power is challenging enough without also having the facts on your side—and that the point of such an analysis is helping you choose your battles, so you can bring your critique to bear at and with the appropriate depth. If the first step in countering the structural exercise of power is exposing the ways in which it works, and the second is developing a popular base of support for change, such a dissection can usefully serve both ends.

At Umm al-Hiran, as in other Forensic Architecture projects, the digital reconstruction of an event creates a four-dimensional envelope of space-time that can be navigated by the engaged viewer, allowing them to explore the causality of relations between objects and circumstances. This acts to undermine the passivity of spectatorship and goes some way towards making good on the promises of interactivity made during the first flush of enthusiasm for digital media in the 1980s and ’90s. And if that were all this piece did, it would be interesting and worthy of comment in and of itself. But like the most successful and significant Forensic Architecture interventions, the Umm al-Hiran work does something more. It simultaneously catalyzes the creation of two communities: one of concern and one of practice. 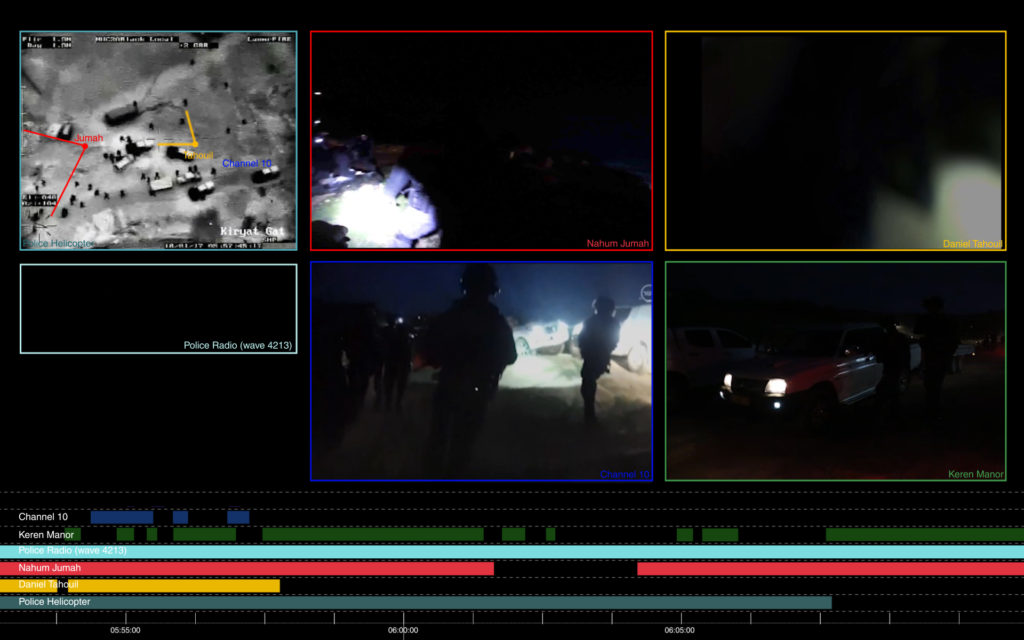 A community of concern, by definition, involves everyone who has a stake in a given set of circumstances and has an interest in establishing one or another perspective as privileged. That which first coalesced around the incident that transpired at Umm al-Hiran on the morning of 18 January has grown significantly, as Forensic Architecture’s intervention has evolved and propagated across one contested terrain after another. Originally conceived as a real-time response to the state’s violence and the initial cycles of official leak and spin that accompanied it, the subsequent generations of this work have expanded to take in the courts, the legislature, the media, and now the art world, at each point gathering new members to this community and enlarging the ambit of those committed to the establishment of truth. Though it may be received and broadly understood as art, this gives the Umm al-Hiran project a degree of reach and potency few art objects ever achieve and allows it to do work in the world in ways most art cannot even aspire to.

And the community of practice is growing as well. There is a method, or a portfolio of methods, behind this work, discrete and describable, and as such, it can be taught and learned. In this regard, one of the most exciting developments of the past few years is that one can now trace the spread of Forensic Architecture’s methodology—at first, under their direct tutelage—to prominent arbiters of consensual truth such as the New York Times and the BBC. An actor of considerable technical sophistication has appeared on the scene, able to wield its competence in modes hitherto unanticipated by state power, and it has begun to share its ways of knowing and doing. The deeds of states, whether obscured by distance, darkness, the Clausewitzian fog of war or dominion over the information space that enfolds the battlespace, are held up to inspection in something very close to real time, and in increasingly high resolution. The claims made by states are subjected to procedures for verification which are themselves open, inspectable and verifiable.

This is not necessarily the same as accountability, let alone is it justice. But it is, credibly, a precondition and a foundation on which these ends might be brought into being. And that’s an extraordinary thing for any practice to be able to represent itself as doing in the current year, most especially a practice of avowed architects operating largely within the aestheticized space we call art.

Adam Greenfield is a London-based writer and urbanist. His most recent book, Radical Technologies: The Design of Everyday Life, was published by Verso in 2017.