CareForce: Creating a Future with Care Workers as Protagonists 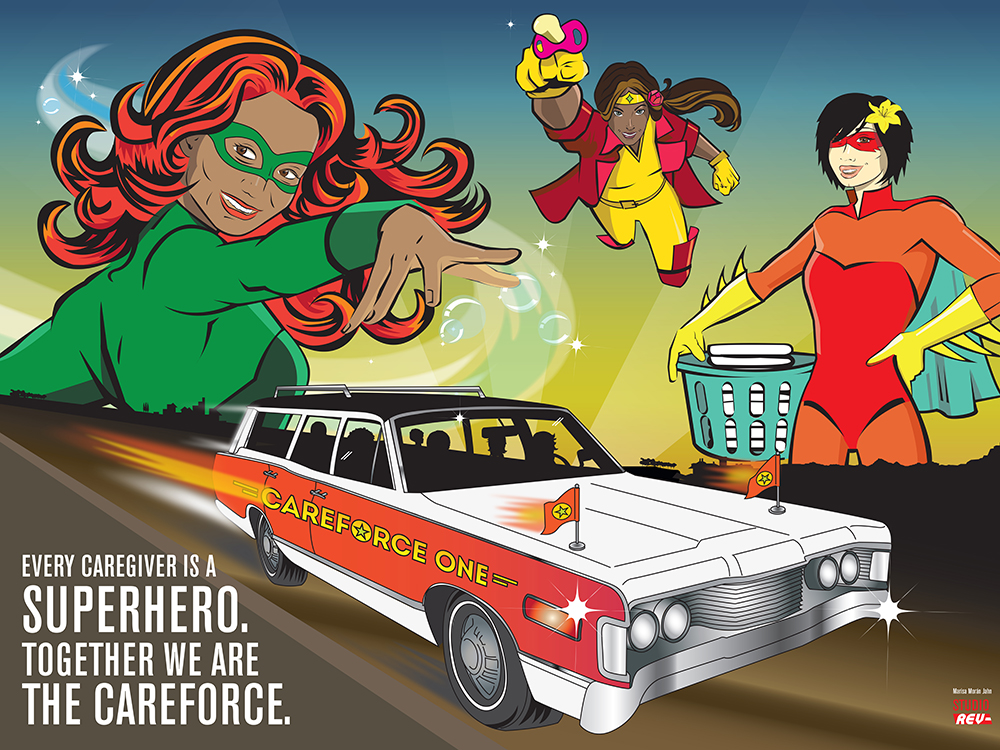 For the past two decades, together with nearly 200,000 nannies, housecleaners and care workers, we have been organizing a powerful yet steady revolution in America—a vibrant movement to transform our care systems with a strong care workforce as the heart of our vision. Our work has been driven by two goals: changing our culture to recognise and value the work of domestic workers, and changing the real-life conditions of work, so that care jobs become good jobs, with real economic security and opportunity.

Just as the women’s movement highlighted that the personal is political—the domestic workers movement is spotlighting the critical value of domestic work. As a movement, we believe that changing culture is an essential part of lasting societal change. This is also why I partnered with artist Marisa Jahn, the founder of the arts and social justice non-profit organization Studio REV-, to create CareForce. As a public art project and film series, CareForce is an exciting, engaging way to amplify the voices and experiences of domestic workers and care workers, who make up one of the fastest growing workforces in our country.

The power of CareForce is rooted in the complex and unique nature of domestic work. Throughout history, domestic work has been considered ‘women’s work,’ and both undervalued and made invisible in our society. In the United States, this history is tied to the legacy of slavery—some of the first domestic workers were enslaved African woman, and when the cornerstone labour laws of the New Deal were being discussed, Southern members of Congress refused to extend protections to domestic workers who were predominantly African American at the time. To this day, some of those exclusions remain.

And yet, caregiving is the work that makes all other work possible. Nannies, home care workers and housecleaners enable parents of young children, people with disabilities and children of aging parents to remain in the workforce. Domestic workers are first responders in times of crisis as they are in our homes, most proximate to our loved ones through illness, family tragedy and natural disasters. They organize, clean, cook, love our children and maintain a sense of harmony and order in our most intimate context: home.

But at what cost to their own homes and families?

Of the more than two million domestic workers in the United States, the majority are black women, women of colour and immigrant women, many of whom are undocumented. Hundreds of thousands of domestic workers live in the shadows, subsisting on below poverty-level wages, fearful of speaking out when mistreated, unaware of their basic labour rights and deprived of safe and secure shelter. The lack of regulations or enforcement of existing protections on federal, state and local levels means that many work in isolated, unjust and dangerous environments.

Despite these challenges, the modern-day domestic workers movement has grown in incredible strides, building power with a framework that embraces a holistic approach to addressing injustice and inequity: ‘whole-person politics’. That’s why the movement for domestic workers’ rights focuses on the full spectrum of caregiving. We reach out to workers in innovative and creative ways to let them know of their rights, breaking their isolation and connecting them to community. We push for legislation to enact and enforce domestic worker protections. We have passed new laws protecting domestic workers in eight states and the city of Seattle, and brought more than two million home care workers under federal minimum wage and overtime protection for the first time in history. We also engage employers—and really everyone—about the universal need for care, and the need to value the contributions and humanity of domestic workers. Embedded in all of our strategies is the belief that humour, beauty, connection and community are fundamental ingredients to a full and rich life. And we believe that art is a key to achieving our goals.

Art has the power to break through barriers of fear and uncertainty. When New York passed the first Bill of Rights for domestic workers, Domestic Workers United, a local advocacy group, approached Marisa to co-design what became an engaging and humorous app for workers to call and learn about their new rights. Workers would call in, hear the voice of another domestic worker, and get connected to a community of workers ready to assist. 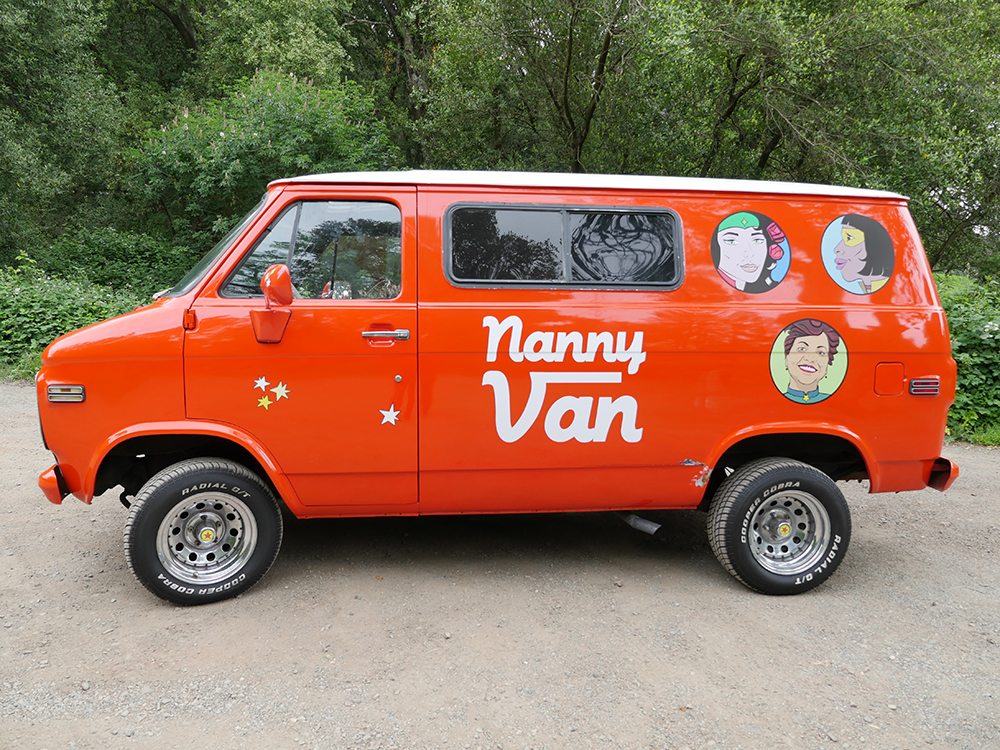 Next, Marisa created the NannyVan, a colourful mobile studio that allowed her, her team, and her newborn son to travel to a number of US cities to meet nannies—at parks, libraries and markets—spark public conversations about domestic work, engage employers and inspire workers to join the movement. With the NannyVan, our advocates, together with Marisa, found a joyful way to encourage workers and employers to learn from one another’s experiences. So, when the old NannyVan ‘died’, we approached Marisa with the idea for a new project—the CareForce One. The project would build upon what we learned in our previous work together and continue to leverage art as a catalyst for both building community and bringing awareness to the value of care.

The new Careforce One was painted with portraits of superheroes—the unsung heroines of the caregiving workforce. In the company of her good friend Anjum and her son, Marisa drove twenty thousand miles across the United States to continue community outreach and movement-building with domestic workers and families. In collaboration with grassroots organizations, Marisa facilitated the creation of paper toolkits, humorous audio novellas and a participatory CareForce Disco (that has involved up to hundreds at a time)!

From this cross-country journey grew CareForce One Travelogues, a series of video diaries for ITVS/PBS Digital that features dynamic and candid conversations with the superheroes of caregiving. Through our ongoing dialogue, Marisa learned that we were eager to document working conditions in the South, where domestic workers have the least protections. So Marisa and her team chronicled their journey from their home in the Northeast down to Florida. 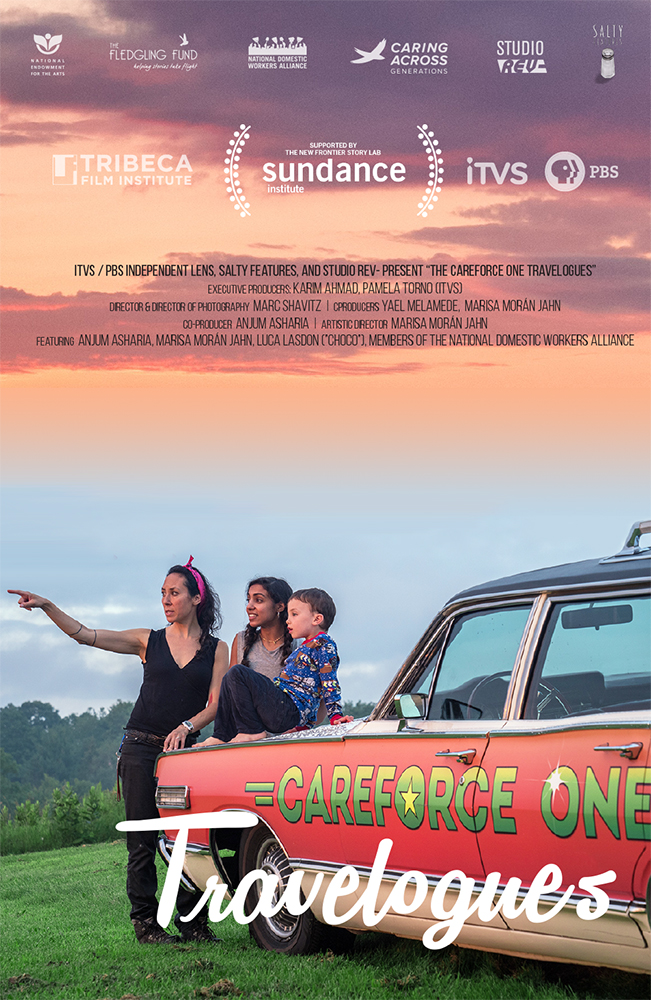 The cast of characters in the Travelogues included women like Natalicia Tracy, a former domestic worker and current Executive Director of the Brazilian Worker Center. As a teenager in Brazil, Natalicia dreamed of completing high school and pursuing professional training. When a family for whom she worked as a nanny invited her to travel with them to Boston to care for their toddler, she took the opportunity. In Boston, however, she was shocked by the conditions of work.  Her employers cut off communication with her family in Brazil. In addition to childcare, her responsibilities included cooking, cleaning, and ironing. She worked fifteen-hour days for $25 per week. She slept on a futon mattress on the cold porch, frequently going to bed on an empty stomach.

Her courageous journey from feeling invisible and isolated to becoming an activist and leader is one that inspires so many of our superheroes as they strive to create a dignified and secure life for themselves and their families. With persistence, hard work and juggling several jobs, Natalicia not only finished school but went on to earn a PhD in Sociology from Boston University.

Through storytelling and art, CareForce reveals the many forces that shape our experiences with care in America. Together, we’re creating platforms for connection and community out of an experience that is still isolating for everyone involved. Whether you’re a care worker, a family caregiver or someone in need of support, caregiving is still largely seen as an individual and personal responsibility that we must navigate on our own, in isolation. In truth, it is an urgent and universal social need that requires a collective solution. As we seek to transform care in America, these types of creative, participatory vehicles will play a critical role in helping engage and connect with the millions of people who have a stake in our solutions.

Art allows us to dream bigger, dream futures into being that we’ve never experienced and create new protagonists. CareForce is harnessing the power of art to catalyse the conversations and connections we need to value our caregivers and our domestic workers. This is the work that is the most proximate to our most basic needs as humans. We believe that elevating it, uniquely elevates us all.

Ai-jen Poo is an award-winning organizer, social innovator, author, and a leading voice in the women’s movement. She is the Executive Director of the National Domestic Workers Alliance, Co-Director of Caring Across Generations, Co-Founder of SuperMajority and Trustee of the Ford Foundation. Ai-jen is a nationally recognized expert on elder and family care, the future of work, gender equality,  immigration, narrative change, and grassroots organizing. She is the author of the celebrated book, The Age of Dignity: Preparing for the Elder Boom in a Changing America. Follow her at @aijenpoo.