Tequiografías is a project by Mexican artist Daniel Godínez-Nivón in collaboration with the AMI (Assembly of Indigenous Migrants) in México City. Concerned with the “ghostly” status of indigenous migrants in the capital, Daniel joined the AMI over a decade ago. This assembly connects people from four different indigenous communities from the region of Oaxaca (Zapotecs, Mixes, Mixtecs and Triquis) who share the status of migrants in Mexico City. There are eleven million indigenous peoples in Mexico, making up around 10% of the country’s population.

In Mexico City, the assembly of indigenous migrants meets every week to practice tequio – a collaborative practice that has a long tradition in most of the sixty eight indigenous groups in Mexico. Tequio is a traditionally rural practice based on mandatory and unpaid work for the good of the community. It can take on various forms, for example, people can be involved in building a school, organizing communal events or playing in a philharmonic band. In the urban context, the practice can include such activities as teaching Linux or languages. In the end, it comes down to sharing your skills with a wider community.

Tequiografías came into being as a response to official educational materials, which tend to misrepresent and homogenize indigenous diversity. They provide an alternative knowledge source based on first-hand indigenous experiences.

The title of the project plays with the original name of the monografías escolares. Monografías escolares are a series of didactic materials implemented by the Educational System in Mexico. Usually on A4 sheets, these monografías address specific topics, such as Mexican cultural traditions and historical events, through images and short explanatory texts. They can be bought in small stationary shops.

Tequiografías answer to these materials by replacing the prefix “mono”, which means “one” or “single” with the collaborative indigenous practice of tequio (a term coming from Nahuatl language). The second part of the word consisting of graphos – a word coming from the Greek that means “to write” or “to draw” describes the contents of the materials. By replacing the prefix “mono” with the collaborative ‘tequio’, the project challenges single narratives and highlights the active and collaborative character of knowledge. 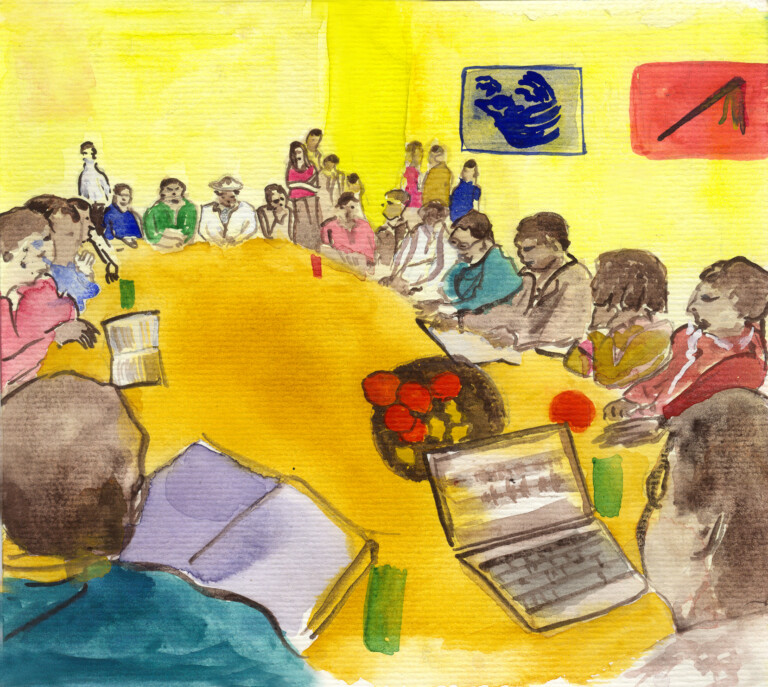 It seems interesting that this project can hardly be defined as being strictly against or in favor of the educational materials currently in use. Simply by placing the Tequiografías next to the monografías they function as complementary knowledge sources and disrupt the deeply rooted narratives that lead to an erasure of the diversity of Mexico’s population. By giving first-hand information about the way indigenous peoples see themselves and the world, they are a tool for indigenous peoples to become active agents in their representation.

Representation happens also on a linguistic level, since Tequiografías are published in Spanish and various indigenous languages. This preservation of indigenous languages keeps a variety of expressions alive – for instance, indigenous words that refer to nature and healing – which have been partly lost through the marginalization of these languages. Considering that losing words also means losing the knowledge and the imaginaries that they stand for should make us reflect upon how much we have lost already.

Furthermore, the methodology of the project deserves a closer look: By using tequio, the artist distances himself from an anthropological research approach that usually works within a strict hierarchy of researcher versus object of study. Favoring instead an eye-to-eye exchange within the assembly, every member becomes an active producer of knowledge. Tequio thus functions as a tool, not only to work within a community, but also to create narratives from a contemporary indigenous perspective. 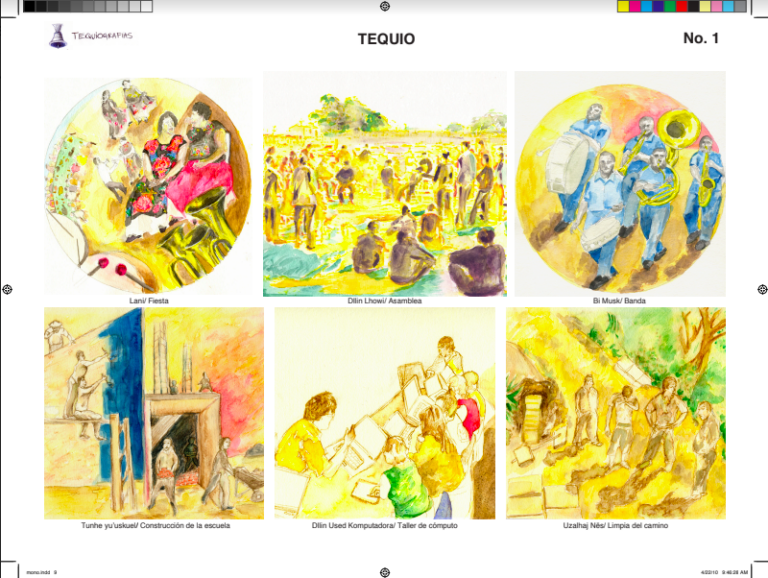 As for the next steps for the project, Daniel explains that the Visible Award would allow the creation of more detailed and tailored Tequiografías for specific indigenous groups. Working within a network bound by the ethics of tequio and formed over a decade, the project is ready to enter a more systematized stage in which more Tequiografías can be regularly produced and distributed on a larger scale. So far there are ten tequiografías on topics such as education, health, death, and community roles, but there are still many issues to tackle. Winning the Visible Award would make this possible.

In a local context, the project sees itself as being immersed in an important political moment in Mexico, since for the first time a left-wing party is in power. This has led to the recent foundation of the INPI (National Institute of Indigenous Peoples), a government agency, which articulates the current situation using the following words: “The indigenous and afro-mexican communities live in conditions of extreme poverty, marginalization and discrimination in all aspects of daily life. The negation, exclusion, abandonment and racism, in summary, the internal colonialism explains this lacerating situation.”

Now, if the acknowledgement of a problem is the first step toward its solution, we believe that Mexico is starting a process of critical self-reflection in which education cannot be left out and Tequiografías could be powerful agents to put this change forward.

Sofia Steinvorth is a researcher, writer and curator based in Lisbon. She is interested in art as a means to communicate different knowledges engaging (all) the senses. Her focus is on human geography, architecture and artistic practices that reveal and (re)shape the relations of people with other people, objects and the environment, acknowledging the central role of situatedness and collaborative practices. She is involved in the production of ELECTRA Magazine