“What is a space but politics?” text by Simon Soon on Readingroom project. 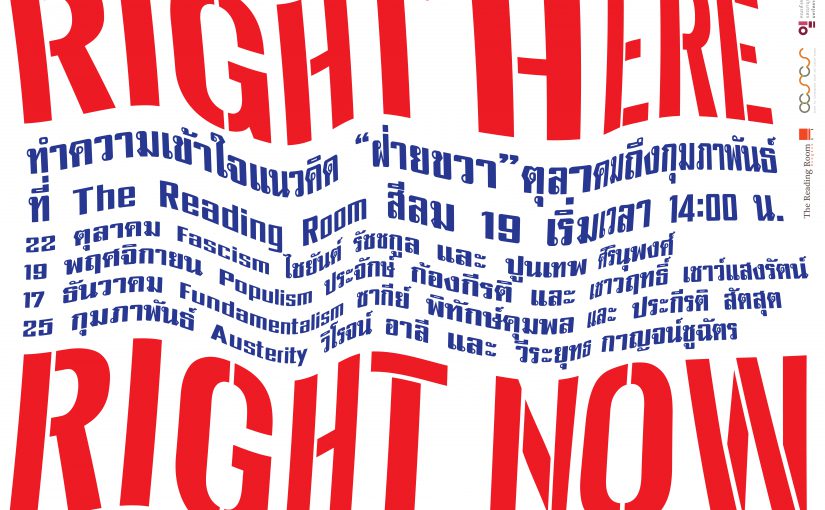 Situated in downtown Bangkok, one climbs up three flights of stairs before discovering a room filled with books. These are stacked in piles on a large wooden table located at the centre, lined neatly on a large rack close to the entrance, stuffed into wooden niches along the walls. The books range from critical theory to art and design, social sciences to literature, film to philosophy. The selection is eclectic as well as idiosyncratic, often centred on the taste and discernment of its founder and owner, Narawan Pathomwat. But it also in many ways rejects her politics.

This is the Readingroom Bangkok. We are not on neutral ground. Since 2009, upon being dismissed from her contract position as a researcher from the Asia Art Archive, a contemporary art archive based in Hong Kong, Narawan began searching for a different vocabulary for a kind of situated practice. Her previous role required her to play local interlocuter, surveying the Bangkok art scene, shipping catalogues to AAA’s Hong Kong headquarters. The process simply abetted in the enrichment of a centre. It became apparent that when major policy reorientation was put into place and when her contract was up, they simply let her go and moved on to greener pastures.

The Readingroom was therefore conceived on the one hand as a riposte against the international curatoriate and the various institutions that continue to play handmaiden to neoliberal agendas under the pretence of research. Instead, it functions primarily as an art library and a place for alternative programs to exist in contrast to commercial museums and galleries. That also means a principled refusal to stage exhibitions and an avowed lack of rhetorical framing of its programs as curatorial gestures or interventions. Talks are talks, a bookshop-mapping project is a bookshop-mapping project, and a screening is a screening. Not an intervention.

This is refreshing given that the contemporary art world and middle class Bangkok thrive on what Anna Tsing calls an ‘economy of appearance’. In that, they share a love for all the surface ceremonies, turns of phrases and gestures that often lack depth and substance.

This is further compounded by a series of coups since 2006, which ousted the then popularly elected Prime Minister Thaksin Shinawatra, divided the country into yellow and red (amongst other politics of colour) and is finally under the current military regime of Prayut O-Cha. It returned the country to its pre-1992 days under various succession of military rule since 1938, four years after Field Marshall Phibulsongkhram wrested control of the People’s Party who just four years before successfully staged a revolt that brought an end to absolute monarchy.

Internal struggles within different factions of the military played to the advantage of the monarchy, through which it successful carved out a very public and visible role as an arbiter of Thailand’s political divide. This was done through the revival of traditional court ceremonies, strategic deployment of fascist visual vocabulary to install monarchical divine privilege that centred on the circulation of the image of the King and his family, building an economic network that provided the capital (both figuratively and metaphorically) to brand the restitution and resacralisation of the monarchical institution from the mid-1950s onwards.

In the 21st century where it is once again established that in Thailand, military rule is the norm rather than the exception, life goes on as usual. The tourists are still arriving; Bangkok maintains its spot as the middle-class gay mecca flushed with pink dollars from across the sinosphere. Amidst the swirl of commercial life along downtown Sathorn district, the Readingroom is a bit like a beacon that shored together geeks, nerds, and activists of all stripes. On any particular night, one would find a different crowd occupying the space. From hackers to political activists, from experimental filmmakers to literary authors, from contemporary artists to students from nearby the  Thammasat and Chulalongkorn University, two of the premier tertiary educational institutions in the country.

They would hold talks related to current issues, offering a broad spectrum of perspectives. A recent talk series titled Right Here, Right Now is centred on located key issues such as fundamentalism, populism, fascism, austerity within the Thai context. The Sleepover series held a year ago saw collaborations with different individuals and collectives that explored banned books in Thailand, the relationship between the army and the people to discursive platforms for regional art history.

Through its situatedness, it actively produces new alignments with different institutions across the world based on its own economic means, desires and wants, not the dictates of London or New York. A Czech Animation Weekend, a tribute weekend to Japanese filmmaker Setsuko Hara, a tribute to Harun Farocki, an introduction to Burmese films, the format of films in the digital age allows for easy cross border sharing and infection of the diverse forms of celluloid dream that help build a vibrant community of experimental filmmakers in the Readingroom.

In this sense, the Readingroom is first and foremost not a local institution interested only in local issues. It is a cosmopolitan space that participates in the world making on its own terms, not on terms dictated by centres of economic power or institutions of economic means. On a normal visit (if there is such a thing), what one might encounter upon climbing up three flights of stairs a book room. Dwell a little longer and you would immediately sense that you have entered a different kind of mental world altogether from that of the swirl of modern commercial life one is wont to find on the streets and alleyways of Sathorn. The carving of this space is sensitively calculated as a form of social practice to address both the contemporary art and Thai social-cultural ecumene. For what is a space but politics?