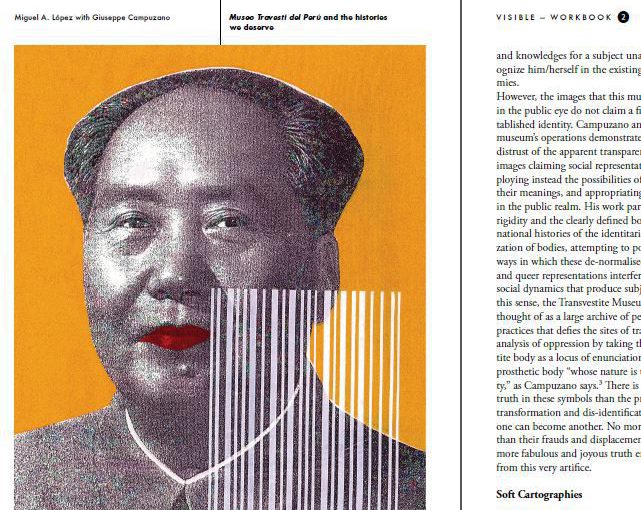 What if a museum and its discourse becomes a space to generate an alternative history of a State, that makes its myths and storytelling seem like they belong to a false and constructed legacy that needs to undergo a serious deconstruction? This is one of the questions that Miguel Lopez is trying to answer in this essay that emerges from a series of discussions and interviews with Giuseppe Campuzano, the philosopher and drag queen that founded the Museo Travesti del Peru (Transvestite Museum of Peru) in Lima. Intended as temporary and movable project, since 2004, the museum has offered, in its many appearances, counter narratives that opposed transvestism to heroism, androgyny and queer culture to masculine and patriarchal society, often using the tool of parody in opposition to the “rigidity and the clear defined borders of the national histories of identitarian organization of bodies” as Lopez affirms. The Museo Travesti del Peru has, at the least, a two-way trajectory. While trying to erode an official history of Peru, molded after a Western heterosexual subjectivity, the museum is able to demonstrate its role within the construction of non-normative ways of belonging to the body of society. Campuzano’s practice is understood in its generative potential for a more complex understanding of democracy: the museum’s “retrospective fictions” are “capable of liberating queer realities without which a worthwhile idea of the future would be unimaginable”.