The Visible Award is the first European award for socially engaged artistic practices in a global context. First awarded in 2011, and then again in 2013, 2015 will be the first time the award is decided through an open jury consultation in the form of a temporary parliament. A public jury format was trialled for the 2013 Award at the Van Abbemuseum in Eindhoven, and has been further developed to seek public engagement with the assessment of existing artistic projects that are operating at the crossroads of art and other fields of society.

The jury session will take place in the grand Council Chamber of Liverpool Town Hall, and will bring together artists, experts, and users of socially engaged artistic practices in a one-day conversation that will try to merge the procedures and criteria of an evaluation process with the discursive elements that characterise panel discussions on the relationship between arts and society. The event, free and open to the public, will focus on assessing the merits of the shortlisted artistic projects (all currently operational) and on the selection of the winner of the 2015 Visible Award, through an open vote.

The 2015 Visible Award has been developed in collaboration with Chris Dercon, Director, Tate Modern, and will be chaired by Francesco Manacorda, Artistic Director, Tate Liverpool, who will coordinate the debate, together with Andrea Phillips in the role of advocate for the projects, between a group of experts operating in different fields of culture, brought together to assess the merits of the artistic projects and lead the selection of the winner of the 2015 Visible Award. Among the invited experts: Assemble (art collective, London), John Byrne (Senior Lecturer in Fine Art at Liverpool School of Art and Design, Liverpool), Beatrice Catanzaro (artist, Milan), Anna Colin (co-director of Open School East, London), Ekaterina Degot (artistic director of the Academy of the Arts of the World, Cologne), Christine Eyene (Guild Research Fellow in Contemporary Art at the University of Central Lancashire), Magdalena Malm (director of the Public Art Agency, Sweden), Emily Pethick (director of The Showroom, London), Laura Raicovich (director of the Queens Art Museum, New York), Nato Thompson (chief curator at Creative Time, New York), and others. 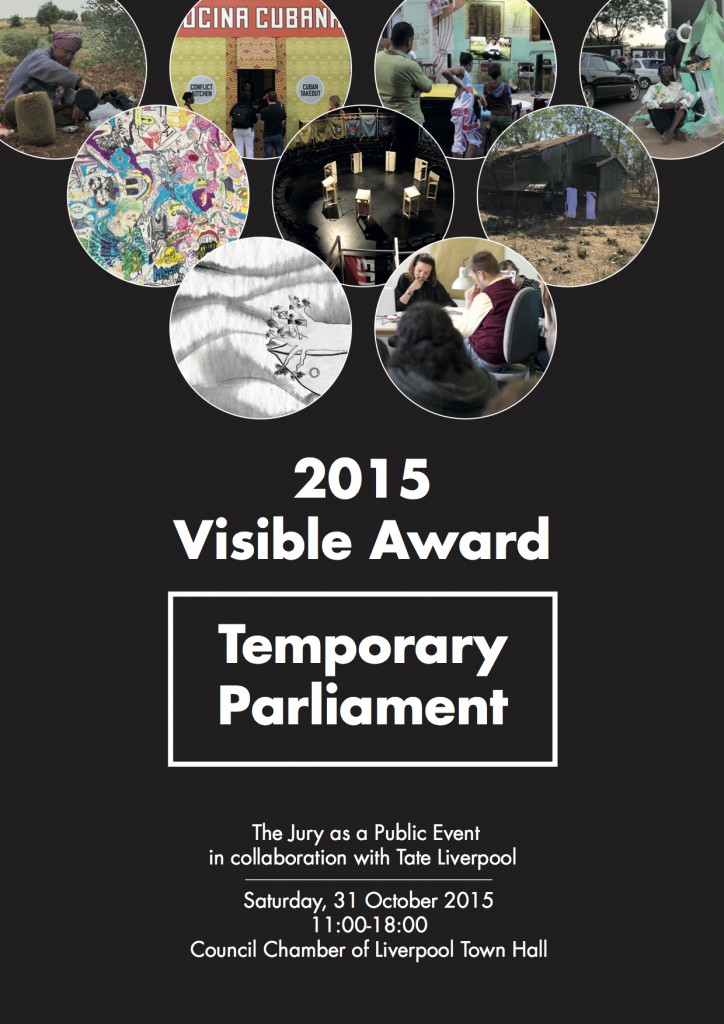 The projects that will be publicly debated by the jury have been shortlisted from a long list of 67 projects, selected from a list of 58 art projects nominated by the 2015 Visible advisory board and 98 projects received through open call. The nine shortlisted projects are:

From Monday 26 October, for the week leading up to the public jury session, Tate Liverpool will host a free temporary exhibition of these nine shortlisted projects, each represented by a video in the museum’s public foyer.

The jury session — live streamed on 31 October at the Visible website (www.visibleproject.org) and to audiences in Tate Liverpool’s foyer and open to interaction through social media — is not simply a dialogue between experts, in order to select an exemplary socially engaged art project, but also a moment for sharing knowledge and collective learning. In the process of assessing the winning project the jury will also offer an opportunity to deepen the debate around artistic engagement in the public domain.

Projects shortlisted for the 2015 Visible Award have been publicly announced on 11 August 2015 during the evening event, The Night Art Made the Future Visible, part of the Creative Time Summit: The Curriculum, within the 56th International Art Exhibition of la Biennale di Venezia: All the World’s Futures. The winning project will be awarded in New York City on the 13th of November 2015 on the occasion of the second installment of The Night Art Made the Future Visible at the Creative Time Summit in New York.